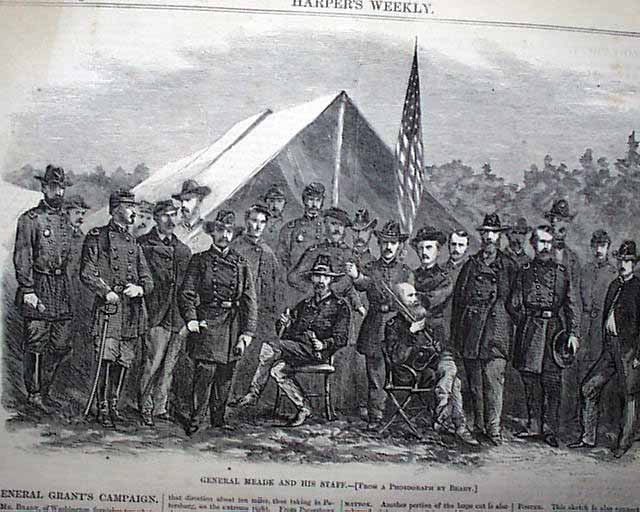 
HARPER'S WEEKLY, New York, July 23, 1864  The entire front page is a print of: "The Sinking of the 'Alabama' Off Cherbourg". Other prints within include: "View on the Appomattox, Below Port Walthall" "Jones's Neck, From General Foster's Head-Quarters, Near Malvern Hill, on the James" "Divine Service at General Baldy Smith's Headquarters in Front of Petersburg" "General Meade & His Staff" "General Burnside and His Staff", a full page: "Map Illustrating the Rebel Invasion in Maryland" "General Sherman's Campaign--The Army of the Cumberland Swinging Around Kenesaw Mountain" "...The Rebel Charge on Our Right, Near Marietta" "Captain John A. Winslow of the 'Kearsarge' " "the Pirate Raphael Semmes" "The Great Railway Disaster Near Montreal, Canada".
The doublepage centerfold has 3 prints: "General Grant's Campaign--A Panoramic View of the Situation Around Petersburg" & "The Pontoon Bridge at Point Bridge at Point of Rocks, on the Appomattox" "The Rebel Fort Clifton & our Batteries on the Appomattox".
The back page has a cartoon: "A Case For the Cold-water Cure". Complete in 16 pages.