Home > Back to Search Results > Uylesses S. Grant and his famous quote...
Click image to enlarge 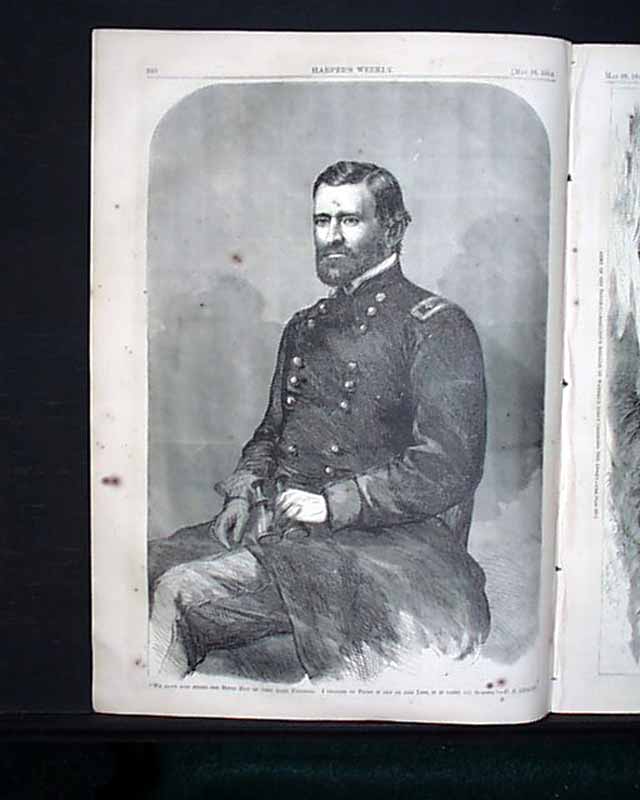 
HARPER'S WEEKLY, New York, May 28, 1864  The full front page is taken up with a nice print of: "Major-General Winfield Scott Hancock". There is much reporting on the war with articles: "Our Armies" "The Dead Heroes" "The Army of the Cumberland" "The Early Hopes of the Rebels" "The Army of the Potomac" "The Battles in the Wilderness" and much more.
Other prints include a full page of Ulysses S. Grant captioned: "We have now ended the sixth day of very hard fighting. I propose to fight it out on this line if it takes all summer." Also a full page: "...Bartlett's Brigade of Warren's Corps Charging the Enemy" which shows hundreds of soldiers; a full page map of: "Grant's Campaign--Topographical Map of Virginia". Also: "Fort Darling and the Rebel Ironclads on the James, Seven Miles Below Richmond" "Destruction of the U.S. Gunboat 'Commodore Jones' on the James" "...Hancock's Corps Crossing the Rapidan..." "The Late Major-General John Sedgwick" "The Late General James C. Rice" "Paris Fashions for May, 1864".
The back page has a cartoon: "Humiliation of England". Complete in 16 pages.