Home > Back to Search Results > Much on General George A. Custer...
Click image to enlarge 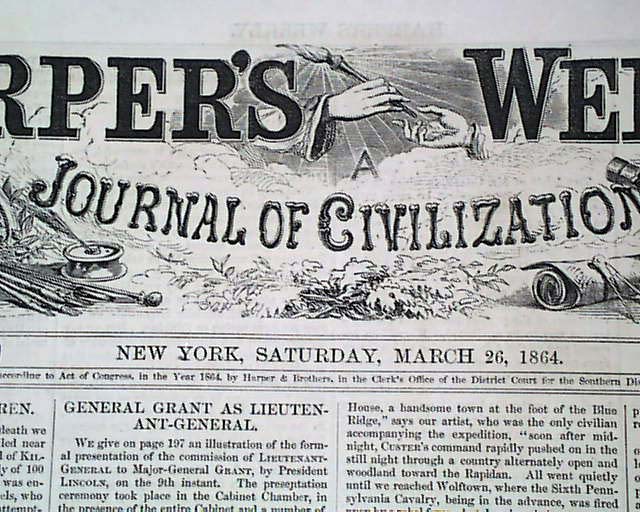 Much on General George A. Custer...


HARPER'S WEEKLY, New York, March 26, 1864  The front page has a print of: "The Late Colonel Ulric Dahlgren" with an article on him. The ftpg. also has articles titled: "General Grant as Lieutenant-General" and "General Custer's Raid".
Inside has a full page: "Ambuscade & Death of Colonel Dahlgren" and also: "General Grant Receiving His Commission as Lieutenant-General From President Lincoln" amongst others. Other prints include: "Fort Morgan" "Grant's Pass" "View of Mobile, Alabama" "Our Fleet Off Mobile" "Hon. Michael Hahn, Governor of Louisiana" "Paris Fashions for March, 1864".
The doublepage centerfold is captioned: "Scenes Connected With General Custer's Late Movement Across the Rapidan" which includes 11 vignettes including "Negroes Leaving the Plough" & "Gen. Custer" & "Gen. Custer, Staff & Prisoners".
The back page has a cartoon: "Gentlemen Opposed to the Soldiers' Voting". Complete in 16 pages.