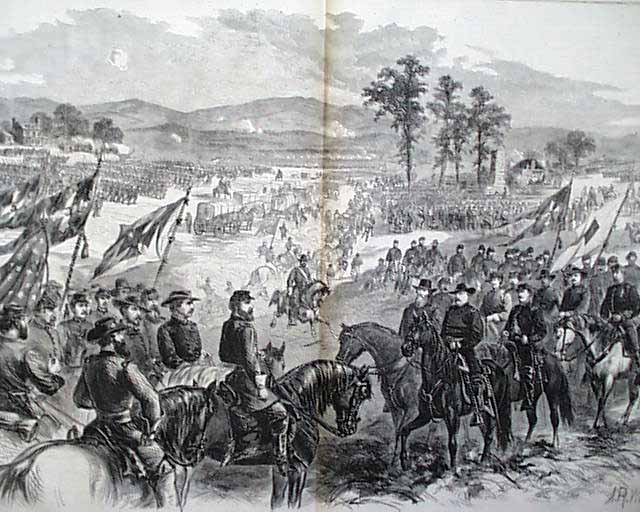 
HARPER'S WEEKLY, New York, January 16, 1864 The full front page is a print captioned: "Averill's Raid".  Inside has prints of: "Major-General Andrew A. Humphreys" "General William W. Averill" "The 'Suck' In The Tennessee River" "The Wreck of the 'Aquila' at San Francisco" "The Iron-Clad Screw Frigate 'Re D' Italia' "The Late Most Reverend John Hughes, D.C., Archbishop of New York" "The Rebel Screw Steamer 'Rappahannock' Lying at Calais, France" "Daboll's Fog-Trumpet in the British Channel" & "Rebel Battery & Obstructions in Charleston Harbor".
The doublepage centerfold is a very nice military print: "An Advance of the  Army of the Potomac" which shows many hundreds of soldiers.
Complete in 16 pages, with a back page cartoon: "New Year's Gift to Little J.B."