Home > Back to Search Results > Battle of Ringgold, and more...
Click image to enlarge 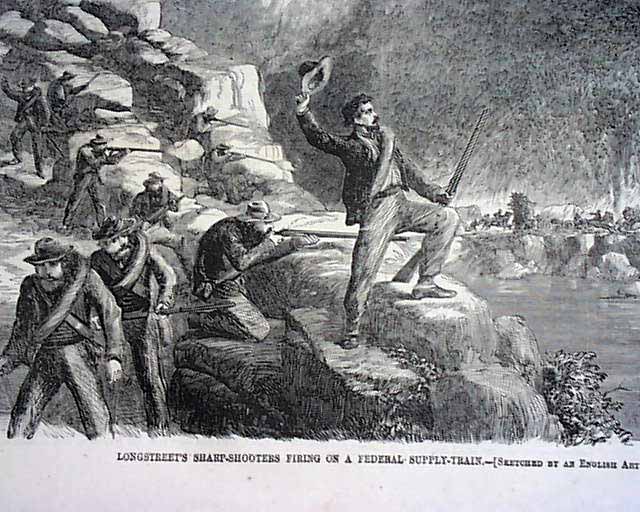 Battle of Ringgold, and more...


HARPER'S WEEKLY, New York, January 9, 1864  Most of the front page is a print: "Longstreet's Sharpshooters Firing On A Federal Supply Train" with some text on it as well. Also ftpg. text on: "The Siege of Charleston". Pages 2 and 3 have much reporting on the Civil War including "Our Men At Richmond" "Soldier's Pay" "First In the Field" "The New Year" "Army & Navy Items" and more. Prints include a full page: "Headquarters of General Thomas--the Captured Cannon" and half pages: "Charge of Colonel Creighton's Brigade at the Battle of Ringgold" & "Fort Saunders Assaulted by a Portion of Longstreet's Corps" with text on both Ringgold and Fort Saunders as well.
The doublepage centerfold is a very dramatic print: "The Rebel Assault on Fort Sunders--The Fight In The Ditch". Other prints within include; "Interior of Fort Sumter after the Bombardment from Morris Island" "Bursting of a Shell in the Streets of Charleston, South Carolina" and 3 prints of: "The Great Western Sanitary Fair at Cincinnati, Ohio". The back page has a cartoon: "Unavoidably Postponed".
Complete in 16 pages.