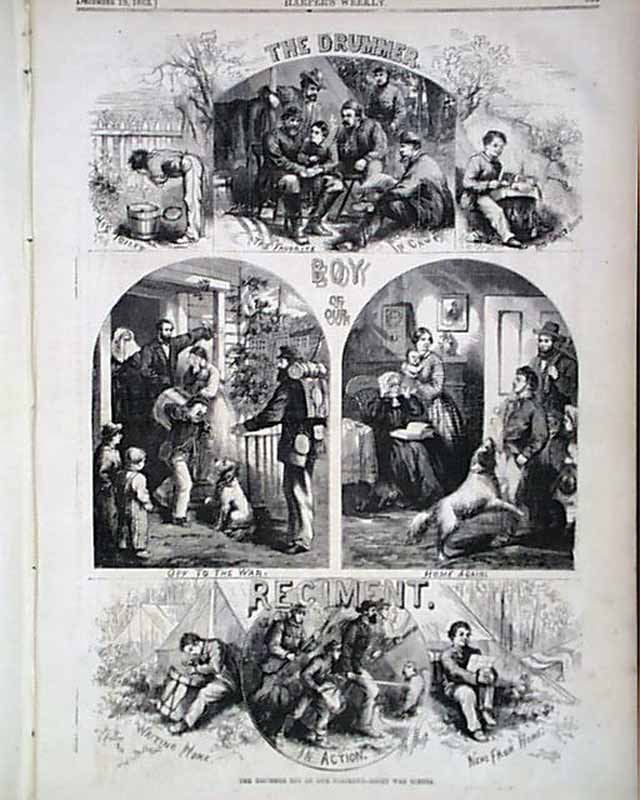 
HARPER'S WEEKLY, New York, December 19, 1863  The front page is entirely taken up with two prints: "The Laird 'El Monassir,' Seized by the British Government" and "The Laird Ram 'El Tousson,' Seized by the British Government". Other prints inside include: "The Third Corps Crossing the Rapidan at Jacobs Ford" "The Army of the Potomac--Brooks's Brigade of Warren's Corps Crossing Germania Mills Ford" "The Drummer Boy of Our Regiment--Eight War Scenes" is by famed artist Thomas Nast.
The doublepage centerfold: "The Army of the Cumberland--The Fourth Corps, Under General Gordon Granger, Storming Missionary Ridge" is a dramatic battle scene. Other prints include: "The Capture of Orchard Knob, Chattanooga, by Hazen's and Willich's Brigades, Deployed as Skirmishers" and "Destruction of the Hudson River Steamboat 'Isaac Newton' by Fire, December 5, 1863" and a print of: "Charles G. Gunther, the Mayor Elect."
The back page has a cartoon: "Another 'Strike'." Complete in 16 pages.