Home > Back to Search Results > Great view of Chattanooga during the Civil War...
Click image to enlarge 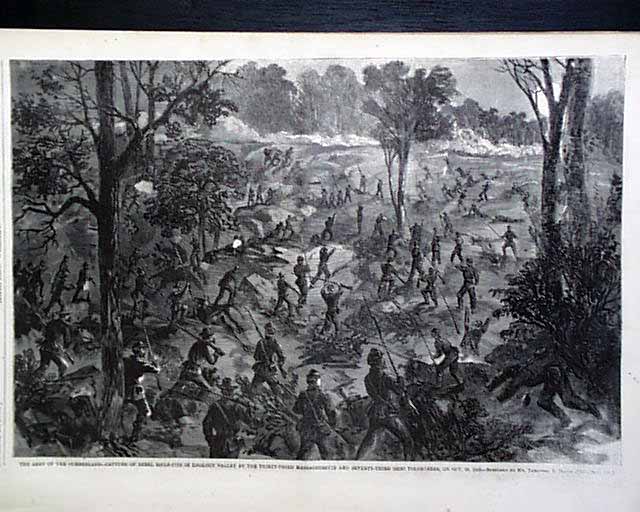 Great view of Chattanooga during the Civil War...


HARPER'S WEEKLY, New York, November 28, 1863  The front page has two prints: "The Army of the Cumberland--Bridging the Tennessee Under Rebel Fire from Lookout Mountain" and: "Landing of General Banks's Expedition on Brazos Santiago, Texas, On November 2, 1863."
Inside has a dramatic full page: "The Army of the Cumberland--Capture of Rebel Rifle-pits in Lookout Valley by the Thirty-Third Massachusetts and Seventy-Third Ohio Volunteers" and a great doublepage centerfold: "General View of Chattanooga and Union Encampments--Rebel Army Beyond Belt of Timber--From Our Signal Station"
Other prints within include: "The Army of the Cumberland--General Hazen's Brigade Descending the Tennessee to Occupy Lookout Valley" "...Hazen's Brigade Landing Below Lookout Mountain on the Morning of October 28" "Major General C.c. Washburne" "Bridal Parure of Mrs. Senator Sprague...Made by Tiffany & Co." "the Army of the Potomac--Capture of Sedgwick's Corps of the Rebel Works on the Rappahannock, Near the Railway Bridge".
The back page has a political cartoon which features Abraham Lincoln: "Drawing Things To A Head." Complete in 16 pages.