Home > Back to Search Results > The Battle of Chickamauga...
Click image to enlarge 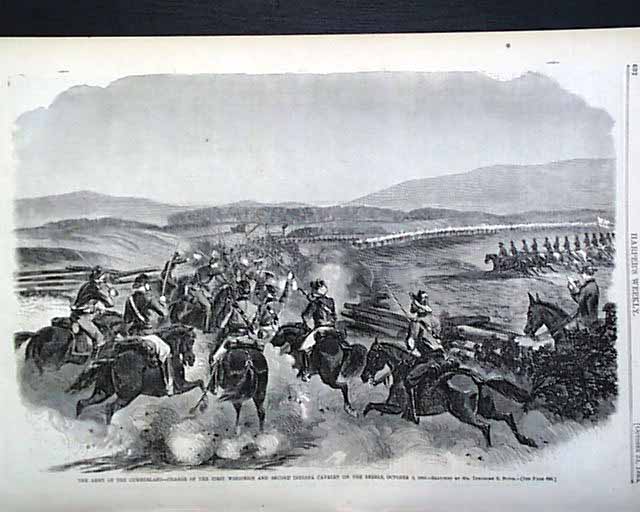 
HARPER'S WEEKLY, New York, October 31, 1863  The front page is taken up with two prints: "The Army Of The Cumberland--Destruction of United States Wagons by Rebel Cavalry..." and "The Army of the Cumberland--Rebel Attack Upon Wagons in Anderson's Gap". Inside has a full page: 'The Army of the Cumberland--Charge of the First Wisconsin and Second Indiana Cavalry On The Rebels" and another full page: "The Sioux War--Cavalry Charge of Sully's Brigade at the Battle Of White Stone Hill" being a fine battle scene with Indians.
Other prints within include a nice doublepage centerfold: "The Battle Of Chickamauga--Thomas's Men Repulsing the Charges of the Rebels"; "The Siege of Charleston--the 'Segar Steamer' Which Propelled the Rebel Torpedo"; "...Attempt to Blow  Up the 'Ironsides' By a Rebel Torpedo" and a full page with 3 print: "The Siege of Charleston--Battery Bee, On Sullivan's Island" & "...The Moultrie House & Fort Beauregard on Sullivan's Island" & "...Present Appearance of Fort Moultrie."
Much Civil War reporting as well. The back page is a political cartoon: "The State Elections". Complete in 16 pages.