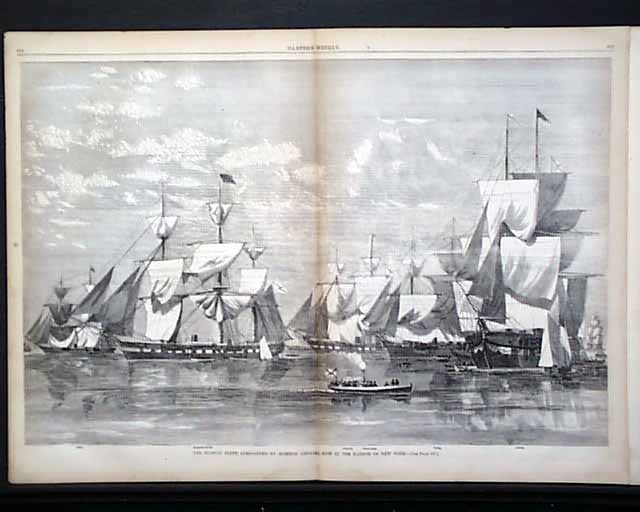 
HARPER'S WEEKLY, New York, October 17, 1863  The full front page shows: "Reception of the Common Council Committee by Admiral Lisovski on Board the Flag-Ship 'Alexander Nevski'". Inside has a full page: "The Grand Procession of Our Russian Visitors Through Broadway, Under Escort of the Militia and Police". Other prints include: "The Anglo-Rebel Pirates--Steam Ram Building for the Rebels in the Clyde, Scotland" "The Anglo-Rebel Pirates--One of Laird's Steam Rams."
The doublepage centerfold is a great naval scene: "The Russian Fleet, Commanded by Admiral Lisovski, Now In the Harbor Of New York". Other prints include: "Interior View Of Libey Prison, Richmond, Virginia, Showing the Quarters of Union Officers Confined There"; "Exterior View of the Libey Prison, Richmond, Virginia" and "Encampment of Union Prisoners at Belle Isle, Richmond, Virginia."
This issue also contains "A Proclamation by the President of the United States of America" in which the first national Thanksgiving is established which was signed into effect on October 3, 1863. It is signed in type: Abraham Lincoln. Other Civil War reporting as well.
The back page has a cartoon: "The Perplexed Pirates." Complete in 16 pages.