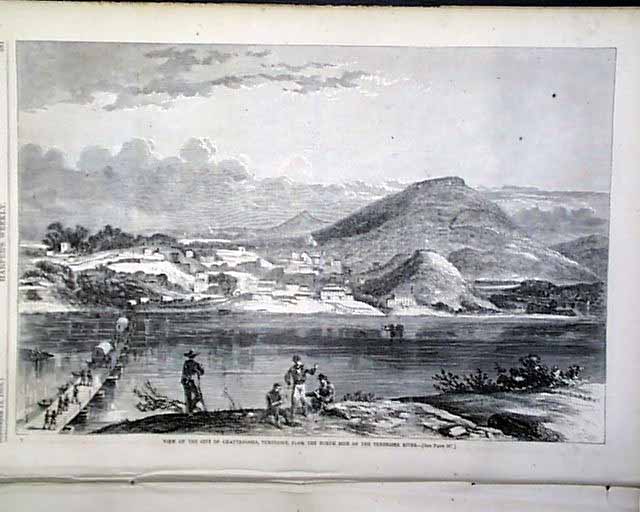 
HARPER'S WEEKLY, New York, September 12, 1863  The front page illustration shows: "Murder of Lieutenant Beaver by the Sioux Indians". Inside has a full page with two prints: "Gen. Sibley's Indian Expedition--Pursuing the Sioux Over the Coteau Du Missouri, Dacotah Territory, After the Battle of the Big HIlls, July 24, 1863" and: "Sibley's Indian Expedition Crossing the James River, Dacotah Territory". A nice full page shows: "View of the City of Chattanooga, Tennessee, From the North Side of the Tennessee River" and another fullpg: "General Quincy A. Gilmore" and yet another: "Appearance of Fort Sumter After Six Days' Bombardment".
A full page has 2 prints: "Bombardment of Fort Sumter--The Fleet Engaging Batteries Wagner and Gregg" and "Rebel Intrenchments on James Island, South Carolina". Another full page has 4 prints: "The Campaign in Charleston Harbor".
The back page has a cartoon: "Retribution--How Are You Mr. Beauregard?" Complete in 16 pages.