Home > Back to Search Results > Capture of Vicksburg...
Click image to enlarge 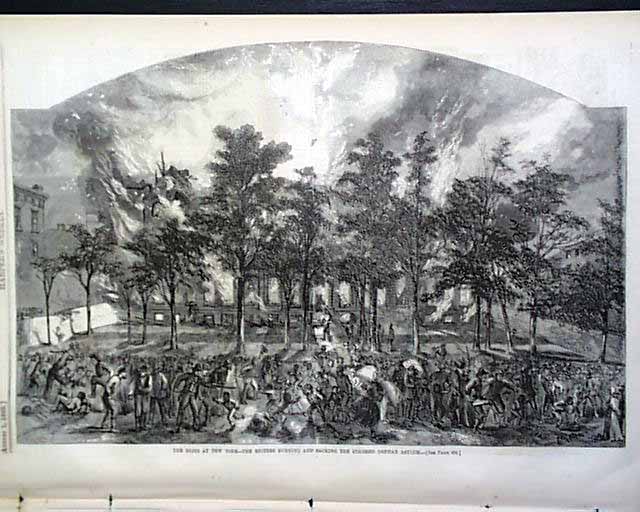 
HARPER'S WEEKLY, New York, August 1, 1863  The front page is taken up with two halfpg. prints: "The Rebel General Bowen and Colonel Montgomery Arriving at General Burbridge's Head-Quarters" and "Capture of Vicksburg--Interview Between Generals Grant and Pemberton to Settle the Terms of Surrender".
Inside has two full pages on the "Riots of New York" which include a total of ten prints. Also a doublepage centerfold: "The Surrender of Vicksburg" with two scenes: "The Rebels Marching Out and Stacking Arms" and "View of the City From the River Bank, Showing Part of the River Batteries". Another full page with two scenes: "The Capture of Vicksburg--Major-General M'Pherson, of Grant's Army, and His Chief Engineers" and "...Arrival of Admiral Porter's Fleet at the Levee on Fourth July, 1863". A full page of: "The Riots at New York--The Rioters Burning and Sacking the Colored Orphan Asylum".
The back page has a cartoon: "How to Escape The Draft". Complete in 16 pages.