Home > Back to Search Results > Moving on to Gettysburg...
Click image to enlarge 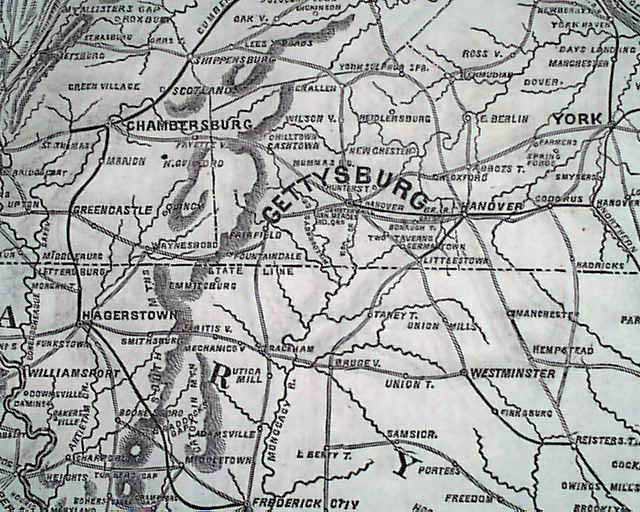 
HARPER'S WEEKLY, New York, July 18, 1863  The full front page is a print: "The Bombardment of Port Hudson--The 100-Pound Parrott Gun of the 'Richmond' at Work". Inside has another fullpg. with 2 scenes: "The Bombardment of Port Hudson--A Mortar Schooner at Work" & "Scene of General Paine's Assault on Port Hudson--carrying Off Our dead & wounded Under a Flag of Truce".
One-third page shows: "Destruction of the Bridge Over the Susquehanna at Columbia, Pa."; a smaller print of: "the Late Major-General John F. Reynolds"; a dramatic and dismal doublepage centerfold: "The Result of War--Virginia in 1863". There is also a full page: "Map Showing the Seat of War in Pennsylvania & Maryland" which shows near the center the town of Gettysburg. A full page with 6 vignettes: "The Invasion of the North--Street Scenes in Philadelphia"; a half page: "The Army of the Potomac--Skirmish at Upperville, Virginia" and another: "Invasion of the North--Harrisburg, Pennsylvania".
There is some nice text relating to Gettysburg, page 2 having an editorial: "The Good News" which notes near the beginning: "After a long period of gloom & discouragement we can again congratulate our readers upon good news. On 3d July...the broken masses of Lee's rebel army, recoiling from the shock of Meade's veterans..." with more concerning the events at Gettysburg, as well as reports on the success at Vicksburg. Another article: "The Invasion of the North" reports on the military events in Pennsylvania just prior to the Battle of Gettysburg, with one subhead: "Action of the Colored People" and the print of General Reynolds is accompanied by an article on his death at the Battle of Gettysburg.
The back page has a political cartoon showing Jeff Davis' face. Complete in 16 pages.