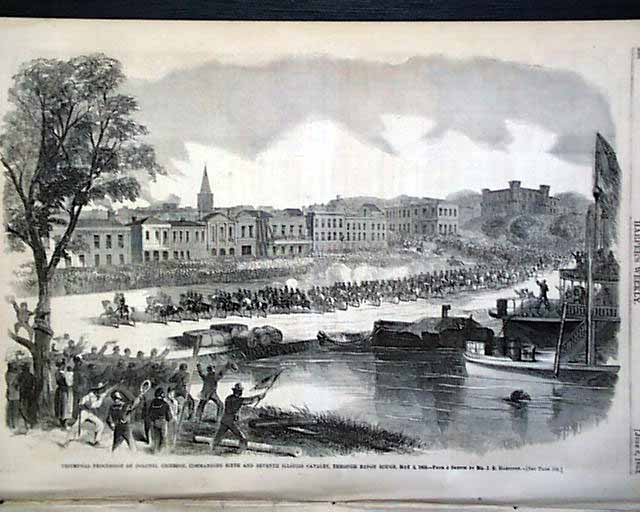 
HARPER'S WEEKLY, New York, June 6, 1863  The full front page is an illustration of: "Colonel Grierson, Sixth Illinois Cavalry." Prints inside include a full page: "Triumphal Procession of Colonel Grierson, Commanding Sixth and Seventh Illinois Cavalry, Through Baton Rouge, May 2, 1863."; two half page illustrations: "Registered Enemies Taking the Oath of Allegiance at the Office of Gen. Bowen, at New Orleans" and "Celebration of May Day by the Madison Girls' School in the City Park, New Orleans-Crowning the May Queen." Also a quarter page: "Map Showing Colonel Grierson's Route from Lagrange to Baton Rouge."
The doublepage centerfold is a very dramatic print of: "The Men of the Northwest Will Hew Their Way to the Gulf of Mexico with their Swords." Also in this issue are a quarter page: "Map of General Grant's Operations Against Vicksburg, in Mississippi"; half page: "The English Pirate 'Alexandra' Seized by the British Government at Liverpool."; half page: "The Prison Over the Pearl River, at Jackson, Mississippi, Where Union Prisoners Have Been Confined."; a half page: "Major General Ulysses S. Grant, U.S.A."; and two quarter page prints of:  "Governor Andrew G. Curtin, of Pennsylvania" and "Clement L. Vallandigham."
The back page has a cartoon: "The Foiled Cracksman". Complete in 16 pages.