Home > Back to Search Results > One of the best Civil War centerfolds...
Click image to enlarge 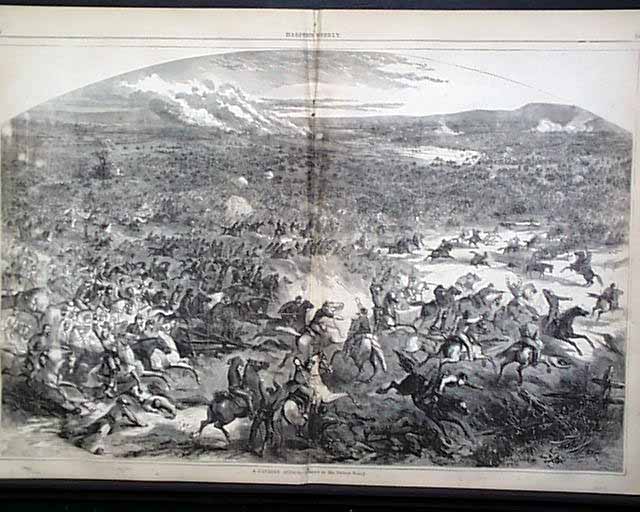 
HARPER'S WEEKLY, New York, May 30, 1863  The front page has a print of: "The Tug 'Rumsey' Accoutred For Running the Rebel Batteries at Vicksburg" with a related article. Prints inside include a small: "Map of the Vicinity of Vicksburg & Jackson, Mississippi, Showing the Theatre  of General Grant's Operations"; two prints of: "Banks's Campaign in Louisiana" showing: "Engagement at Butte La Rose" & "Destruction of the 'Queen of the West' by Union Gunboats"; a full page: "Colonel Kilpatrick's Late Cavalry Raid through Virginia"; a full-figure print of: "The Late  'Stonewall' Jackson" with a lengthy article on him; prints of: "The Scout Davidson on Duty" and of him "Off Duty".
There is a terrific doublepage centerfold by Thomas Nast titled: "A Cavalry Attack" which sows hundreds & hundreds of soldiers charging no horseback.
The back page has a cartoon: "The Slave Owner's Spectre" is a parody of Poe's The Raven. Complete in 16 pages.