Home > Back to Search Results > Battle of Chancellorsville...
Click image to enlarge 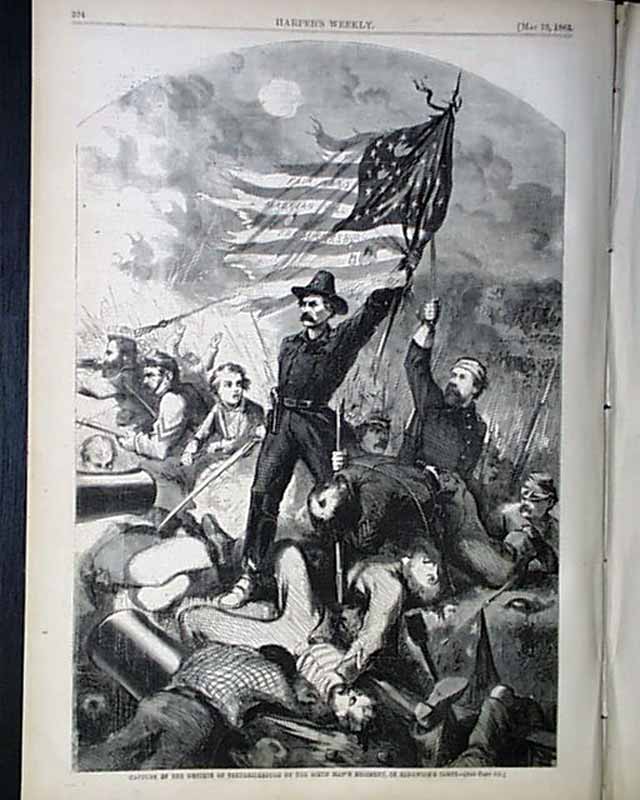 
HARPER'S WEEKLY, New York, May 23, 1863  Nice full front page print of: "Major-General George Stoneman" on horseback. Prints within include a full page: "Capture of the Heights of Fredericksburg by the Sixth Maine Regiment, of Sedgwick's Corps" which is very displayable; a full page: "The Battle at Chancellorsville--Cough's Corps Forming Line of Battle to Cover the Retreat of the 11th Corps"; full page: "Map of the Seat of War in Virginia"; and a fullpg: "Map of the Mississippi, From Haines Bluff to Grand Gulf".
The doublepage centerfold has two prints of: "The Battles at Chancellorsville". There are also two more full pages with 5 prints of: "The Battles at Chancellorsville--Second & Third Corps's Repelling Jackson's Assault--General Hooker's Headquarters in the Field--Splendid Advance of Sykes's Regulars--Centre of our Line of Battle--Steam-Mill used as a Medical Depot".
The back page has a political cartoon: "The Music of Mozart." Complete in 16 pages.