Home > Back to Search Results > The Civil War in Louisiana... Slaves head toward freedom...
Click image to enlarge 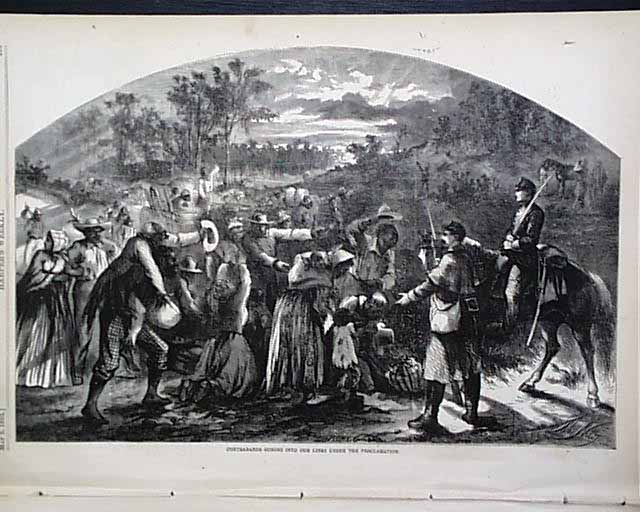 
HARPER'S WEEKLY, New York, May 9, 1863  The entire front page is taken up with a print: "On Picket Duty in the Swamps of Louisiana". Inside two half pages show: "Brashear City, Berwick's Bay, La., Base of General Banks's Operations" and "Iron-clad 'Barrataria' Snagged in Amite River, La. and Attacked by Rebel Guerrillas". There is a great full page by Thomas Nast: "Contrabands [slaves] Coming Into our Lines Under the Proclamation" which is very displayable.
The doublepage centerfold shows: "General Hooker and His Personal Staff". Also a full page with 3 prints: "The Floating Hospital on the Mississippi"; a halfpg: "The Steamer 'Escort' Running the Rebel Batteries Near Washington, North Carolina"; a small print of: "Prince Salm-Salm, Colonel 8th Regiment New York Volunteers" and a small: "Map Showing the Theatre of General Banks's Campaign".
The back page has a cartoon: "The Food Question Down South." which shows Jeff Davis and General Beauregard. Complete in 16 pages.