Home > Back to Search Results > "Negro Regiment in Action"...
Click image to enlarge 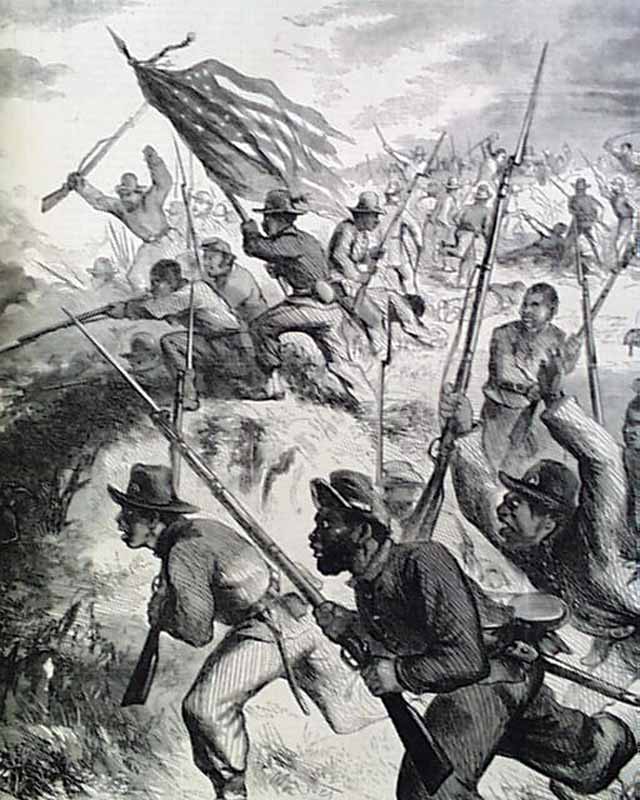 
HARPER'S WEEKLY, New York, March 14, 1863 The full front page is a print of: "Teaching the Negro Recruits the Use of the Minie Rifle", a print showing Black soldiers.
Other nice prints within include a full page with three prints and a map: "Beulah Battery, at the Junction of Burnside and Vernon Rivers", "The Rebel Turtle Ram Just Launched at Savannah", "The Rebel Steamer 'Nashville' Lying at the Railway Bridge, on the Ogeechee River" and "Map of the Environs of Savannah".
Also a one-third page print of "Major General David Hunter" and "The Overflow of the Tuscumbia River Near Corinth, Mississippi".
The action-packed doublepage centerfold shows: "A Negro Regiment in Action" which is quite dramatic, done by noted artist Thomas Nast. Also in this issue are illustrations of" "The Rebel General R. E. Lee" and "The Rebel General Stonewall Jackson". Full page: "Great Union and Emancipation Meeting Held at Exeter Hall, London".
The back page has a cartoon: "Sad Misadventure of the Copperhead Delegation to Richmond" which includes Jefferson Davis.