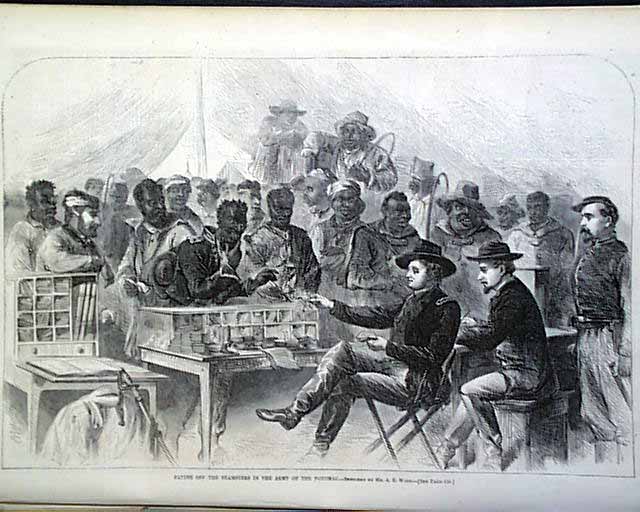 
HARPER'S WEEKLY, New York, March 7, 1863  The front page features a full-figure print of: "The Late Nicholas Longworth, the Western Millionaire" with the balance of the front page taken up with an article on him, carrying over to page 2.
Other prints within include a full page: "Paying Off The Teamsters in the Army of the Potomac" showing many African-Americans. Also a full page: "The United States Gunboat 'Indianola' Ironclad, Running the Blockade at Vicksburg."; a half page: "the Poor of New Orleans Applying to Colonel Thorpe For Employment at the City Surveyor's Office"; halfpg: "Departure of Registered enemies of the United States From Port Hickok to Madisonville, La." and "Landing of Registered Enemies of the U.S. at Madisonville, La."
The doublepage centerfold is a very dramatic print of a battle in action, done by Thomas  Nast: "A Scene In one of the Battles Before Vicksburg".
The back page has 2 political cartoons: "Design for a Modern Historical Picture" and "The Arkansas Traveler". Complete in 16 pages.