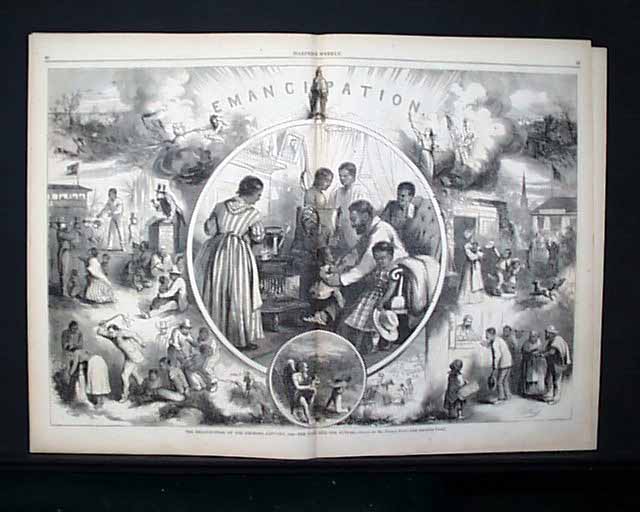 
HARPER'S WEEKLY, New York, January 24, 1863  This issue contains a fine centerfold by Thomas Nast: "The Emancipation of the Negroes, January, 1863--The Past and the Future" with several vignettes. This also has an accompanying article which explains the illustration and references the famous Mr. Pierce M. Butler slave auction which took place on March 2-3, 1859 outside of Savannah, Georgia (The "Weeping Day" auction). This was the largest selling of humans in the United States -- 436 men, women and children, and includes quoted text from the original newspaper coverage.
The front page includes two 1/4 pg. prints: "Major-General William T. Sherman" and "Brigadier-General Alvin P. Hovey", plus a half page print: "The New Orleans Market--Soldiers Exchanging Rations for Fruit". Also included is a full page by Winslow Homer: "Winter Quarters in Camp--The Inside of a Hut". Another half page print has: "The Army Telegraph--Setting Up the Wire During an Action", and small prints of: "The Army Telegraph--The Operator at Work" and "A Signal Station at Night".
In contrast to the emancipation-themed print is a nearly half page print: "A Slave-pen at New Orleans--Before the Auction. A Sketch of the Past" which has a small accompanying article, and two more half page prints: "The Wreck of the Iron-Clad 'Monitor" and "Secesh Women Leaving Washington for Richmond".
The back page features 3 political cartoons. Complete in 16 pages.