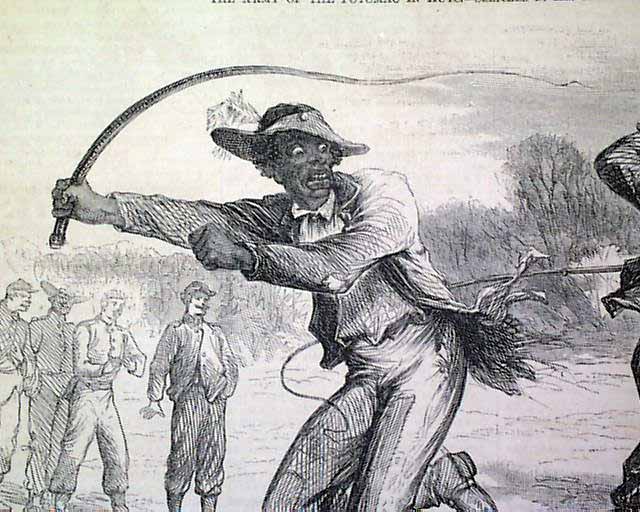 
HARPER'S WEEKLY, New York, January 17, 1863  Certainly the most historic content would be the page 2 complete printing of: "By the President of the United States of America - A Proclamation" which is the full text of the Emancipation Proclamation, signed in type by the President: Abraham Lincoln.
Half of the front page: "The Teamsters' Duel" showing two Black men with horse whips. The other half of the front page shows: "The Army of the Potomac in Hunts".
Perhaps the most notable print is a nice full page by famed artist Winslow Homer: "A Shell in the Rebel Trenches" showing many Black soldiers. Other prints include a halfpg: "Execution of Thirty-Eight Indian Murderers at Mankato, Minnesota"; half page: "General Banks's Forces Landing at Baton Rouge, Louisiana"; full page: "Reception of the Authorities of New Orleans By General Butler Previous to His Departure". There are two 1/4 page portraits of "Brigadier-General James G. Blunt, of Kansas" and "Brigadier-General John McNeil, of Missouri", and maps including: "Map of Mississippi, Showing the Field of Operations of Generals Sherman, Grant, & Banks"  "Plan of the
Battle of Prairie Grove, Arkansas" "Map of the Battle of Murfreesboro, Tennessee" & "Map of Vicksburg, Miss., Showing the Field of Operations of General Sherman".
The doublepage centerfold is by noted artist Thomas Nast, titled: "The War In The Border States" and captioned: "The War In The West".
The back page features two political cartoons, one featuring Abraham Lincoln. Complete in 16 pages, nice condition.