Home > Back to Search Results > Nast on "After the Battle"... Civil War maps...
Click image to enlarge 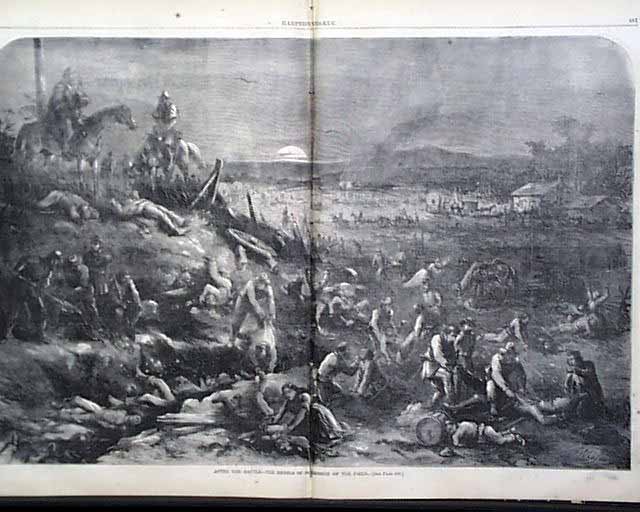 
HARPER'S WEEKLY, New York, October 25, 1862  The full front page is a print of: "Garibaldi, Wounded and A Prisoner". The prints within this issue include 3 scenes: "The Campaign in Maryland--Flag of Truce from the Rebels" "Battle of South Mountain--Franklin's Corps Storming Crampton's Pass" showing 4 views, including Boonesborough, Maryland, and Middleton, Maryland. A full page: "Map of Kentucky, Showing the Theatre of the Contest Between Generals Buell and Bragg" and a fullpg: "Map of Part of Maryland, Showing the Scene of the Late Rebel Raid" north to Chambersburg, Pennsylvania.
The dramatic doublepage centerfold is by Thomas Nast: "After the Battle--The Rebels In Possession of the Field". Additional prints include: "Major-General Buell's Army Crossing Salt River, Kentucky, in Pursuit of Bragg" "The President's Visit to the Army of the Potomac--Arrival at the Station at Frederick" "Brigadier-General Wadsworth, Union Candidate for Governor of New York" "The Rebel Bishop-General Polk" "Mayport Mills, Mouth of St. John's River, Florida" & "Battery on St. John's Bluff, Florida, Taken by Our Forces."
The back page has 3 political cartoons: "What the Seymour Party Say" "What the Seymour Party Mean" & "Evidently Sincere." Complete in 16 pages.