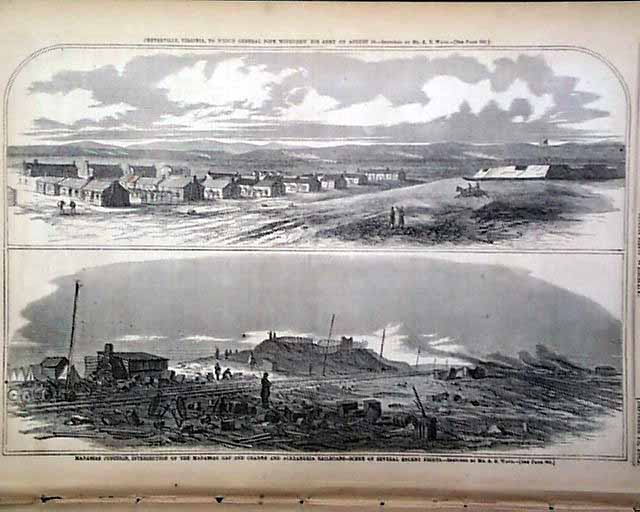 
HARPER'S WEEKLY, New York, September 13, 1862  The front page is taken up with a nearly full-figure print of "Major-General John Pope, Commanding the Army of Virginia" along with a biography of him.
Inside includes a full page with 2 prints of: "Manassas Junction...Scene of Several Recent Fights" which is the Second Battle of Bull Run; a full page with 3 prints of: "Gen. Pope's Hqts. at Rappahannock Station..." & "Skirmish at Freeman's Ford...Death of General Bohlen" & "Warrenton, Virginia, Lately Occupied by the Army of Virginia"; a nearly full page: "Map of the Seat of War in Virginia, Showing the Sites of the Recent Battles"; a full page with 2 prints of: "Camp Curtin Near Harrisburg, Pennsylvania" & "Camp Morton, Near Indianapolis, Indiana"; a full page with 5 scenes of: "Southern Tennessee & Mississippi". Also a nice doublepage centerfold of: "Our New Iron-Clad Navy" which includes prints of 10 ironclads, plus some others. Included is the historic "Monitor".
The back page features two political cartoon. Complete in 16 pages.