Home > Back to Search Results > The battles before Richmond...
Click image to enlarge 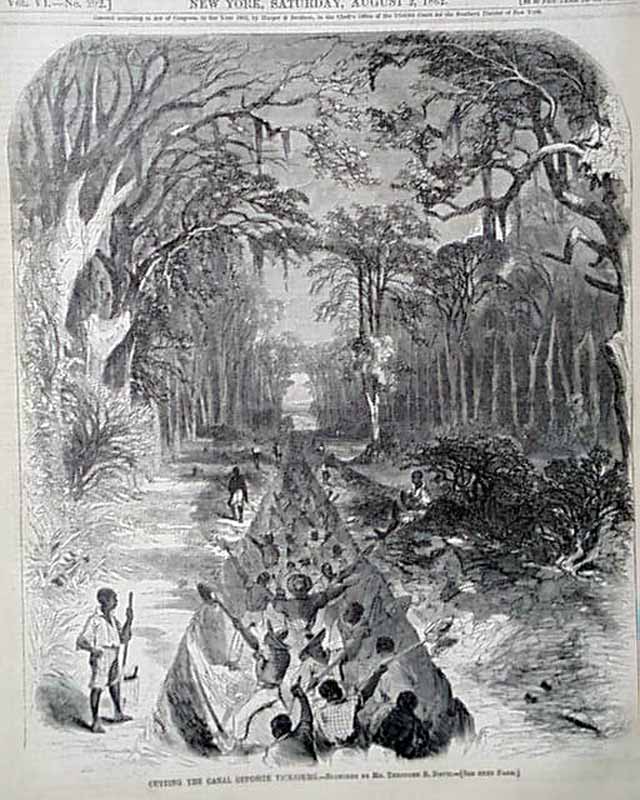 The battles before Richmond...


HARPER'S WEEKLY, New York, August 2, 1862  The entire front page is a print showing African-Americans: "Cutting the Canal Opposite Vicksburg".  Inside prints include: "View of The City of Vicksburg, Mississippi" "The City of Huntsville, Alabama" "The Battles Before Richmond--Ayers's Artillery (Smith's Division) Keeping the Rebels in Check at White Oak Swamp" "Major-General Dix" "Brigadier-General Couch" "Capture of the Rebel Gun-Boat 'Teaser' in the James River" "Rebel Batteries at Fort Powhatan on the James River, Firing on the Union Transport 'Daniel Webster' ".
The doublepage centerfold has 2 nice prints: "The Army of the Potomac--General McClellan Arriving On the Bank of the James River" and "Transports Landing Reinforcements & Stores at Harrison's Landing on the James River". Other prints include: "California Joe, of the Beerdan Sharp-Shooters" with a related article; " 'McClellan Is Our Man'--Favorite Song of the Army of the Potomac" " "Presentation of a Flag to the 13th Connecticut Regiment by Loyal Ladies of New Orleans".
The back page has 3 political cartoons including: "Quartering of the Enemy" & "Scene, Fifth Avenue". Complete in 16 pages.