Home > Back to Search Results > Battle of Malvern Hill...
Click image to enlarge 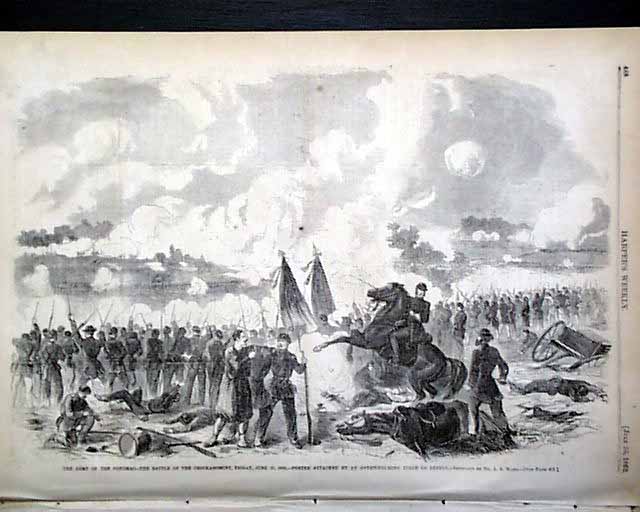 
HARPER'S WEEKLY, New York, July 26, 1862  The front page shows 3 views of the "New Rebel Iron-Clad 'Richmond' or 'Virginia #2'', one being a sectional view. Also on the front page are prints of: "Brigadier-General Daniel Butterfield" and "Brigadier-General Truman Seymour".
Other prints within include: "Army of the Potomac--Battle of the Chickahominy...Porter Attacked by an Overwhelming Force of Rebels" "Scenes In & About the Army of the Potomac" has  6 prints; "The Battle of Beaver Creek" "The Gun-Boats 'Galena' and 'Mahaska' Shelling the Rebels at Harrison's Landing".
The action-filled doublepage centerfold is: "Battle of Malvern Hill, Virginia...Rebels Repulsed by the Union Artillery". Other prints include: "Attack Upon the Mortar-Fleet by Rebel Land Forces" "The Fleet Shelling the Rebel Batteries at Vicksburgh" "Cutting a Canal Across the Isthmus" ""Battle at Savage's Station...Sumner Repulsing the Rebels" "Com. Davis's Fleet on the Way Down the Mississippi" "Mortar-Boats Firing on the City at Night" and more.
Also within this issue is the Confiscation Bill with information on the Congressional proceedings leading up to the passing of the Bill. There is also a draft of a bill to compensate any state which may abolish slavery, with a prefacing note signed: Abraham Lincoln.
The back page has 2 political cartoons: "Virtuous Indignation of John Bull at the Horrors of the War for the Union" and "A Good Way for Fathers of Families to Aid Recruiting". Complete in 16 pages.