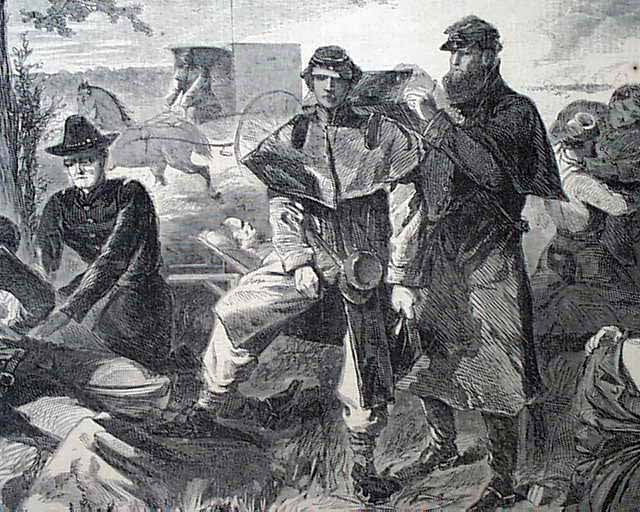 
HARPER'S WEEKLY, New York, July 12, 1862  The front page has 3 prints: "Major-General Lewis Wallace in Command at Memphis, Tennessee" "Brigadier-General George F. Shepley, Commandant of New Orleans" & "Battle at St. Charles, White River, Arkansas--Explosion of the 'Mound City' ".
Page 3 has a small cartoon: "The Rebel Flea." Other prints within include a great full page by noted artist Winslow Homer: "The Surgeon at Work at the Rear During an Engagement" plus the doublepage centerfold also by Homer: "The War For the Union--Bayonet Charge" which is full of action.
Additional prints including; "Bird's-Eye View of Richmond and the Vicinity" "The Old Hampton Church at Hampton, Virginia" "The Army of the Potomac--A Foraging Party" "Major General Benjamin F. Butler, Commanding Dept. of the Gulf" "Contrabands [slaves] Escaping to the United States Bark 'Kingfisher' Off the Coast of Florida" and "Major-General John Pope, Commanding the Army of Virginia".
The back page has two political cartoons which relate to the controversial Proclamation of Butler concerning the women of New Orleans: "The Ladies of New Orleans Before General Butler's Proclamation" and "After General Butler's Proclamation". These cartoons are of such significance that Wikipedia uses them in its report of the Proclamation.