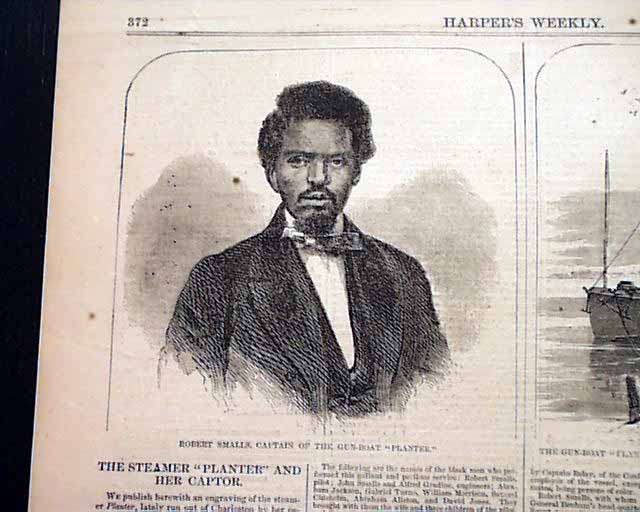 
HARPER'S WEEKLY, New York, June 14, 1862  Perhaps the most notable print (with related text) is that of: "Robert Smalls, Captain of the Gun Boat 'Planter' " which includes a related article as well.  As Wikipedia notes, Robert Smalls was an enslaved African American who freed himself, his crew and their families from slavery by commandeering a Confederate transport ship, CSS Planter, in Charleston harbor, and sailing it from Confederate controlled waters to the U.S. blockade. His example and persuasion helped convince President Lincoln to accept African-American soldiers into the U.S. Army and the U.S. Navy. He would eventually go on to become the South Carolina representative to the United States House of Representatives.
Additional slavery themed coverage (with corresponding prints) includes: "Feeding the Negro Children Under Charge of the Military Authorities at Hilton Head" and "Our Black Friends Down South".
Always of interest are prints by the famed artist Winslow Homer, and this issue does not disappoint with a doublepage centerfold titled "News From The War", which features 6 images done by him.
Other prints and articles include: the full front page: "The Flag-Ship 'Hartford' Attacked by the Ram 'Manassas' & a Fire-Raft in the Mississippi", "Our Troops Marching Down Into the Trenches Before Richmond", "Release of Union Prisoners to General Burnside at Washington, North Carolina", "The Confederate Military Prison at Salisbury, North Carolina...", "The Starving People of New Orleans Fed by the United States Military Authorities", and "Hon. Moses F. Odell, Member of Congress from Brooklyn, N.Y.". The back page has two political cartoon.
Complete in 16 pages, only minor (typical) spotting and foxing, in overall nice condition.