Home > Back to Search Results > Battle of Pea Ridge, and much more...
Click image to enlarge 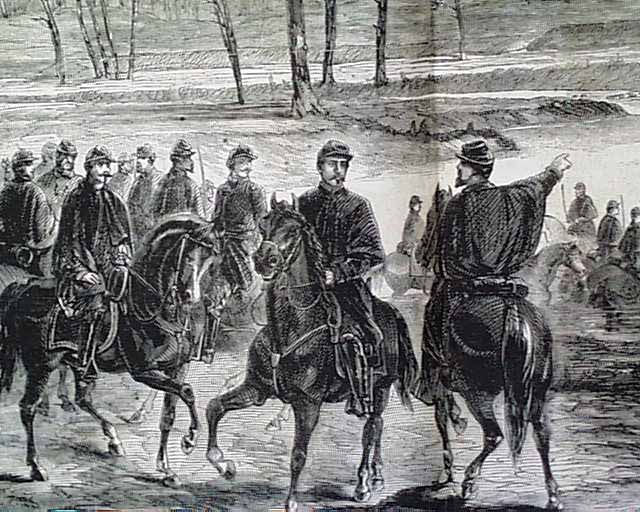 
HARPER'S WEEKLY, New York, March 29, 1862  The full front page shows: "A Thrilling Scene in East Tennessee --Colonel Fry and the Union Men Swearing by the Flag". Other prints inside include a dramatic fullpg: "The Battle of Pea Ridge, Arkansas--the Final Advance of Our Troops" and "Columbus, Kentucky, After the Rebel Evacuation" and "Fort Clinch, Fernandina, Florida Now Occupied by General Wright's Union Forces" and a full page: "Map of the Southern States Showing the Strategic Points & Their Railroad Connections..."
The doublepage centerfold shows military scenes: "Major-General M'Clellan, Major-General M'Dowell, and Staffs, Escorted by the Fifth Cavalry" & "Bridge Over Bull Run, Near Blackburn's Ford, Burned by the Rebels" & "Evacuation and Firing of Manassas Junction by the Rebels" Also another full page: "Rebel Winter Quarters at Centreville, Virginia..." with: "Intersection of the Orange & Alexandria Railroad...at Manassas Junction". There is also a smaller print of: "Captain John; Ericsson".
The back page has a political cartoon: "On To Richmond!! Down with M'Clellan!". Complete in 16 pages.