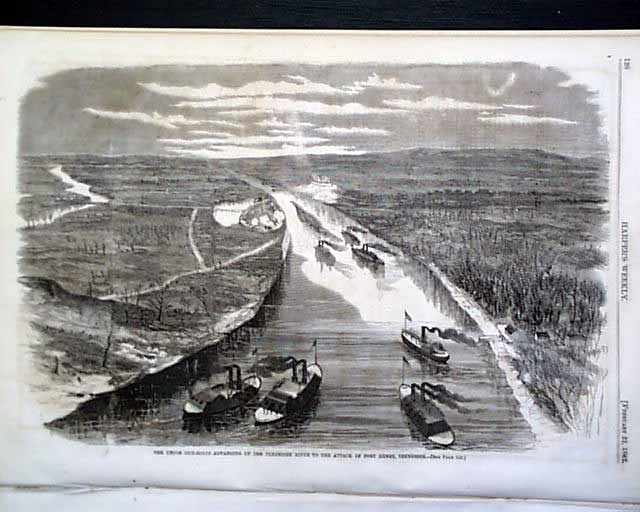 
HARPER'S WEEKLY, New York, February 22, 1862  The front page has: "Gun-deck of One of the Mississippi Gunboats engaged in the Attack on Fort Henry" and a print of: "Commodore Foote, U.S.N." as well as a related article.
Inside page prints including a fullpg. with portraits of: "Lord Lyons, the British Minister to Washington" "M. Mercier, The French Minister..." "Baron Stoeckel, Russian Minister..." and "Baron VonGerolt Prussian Minister..."; a full pg. with 6 images of: "The Prisoners and Jailers at Richmond"; a halfpg: "Map of the Theatre of the War in Western Tennessee"; a fullpg: "The Union Gunboats Advancing up the Tennessee River to the Attack of Fort Henry"; a fullpg. with 4 images of: "Why The Army of the Potomac Doesn't Move"; a fullpg: "Skating Carnival in Brooklyn"; halfpg: "Battle Between the Mexicans & the Allied Invaders at the National Bridge, Near Vera Cruz"; and a halfpg: "The Recent Inundation of the Ohio at Cincinnati".
The back page has 2 political cartoons. Sixteen pages, nice condition.