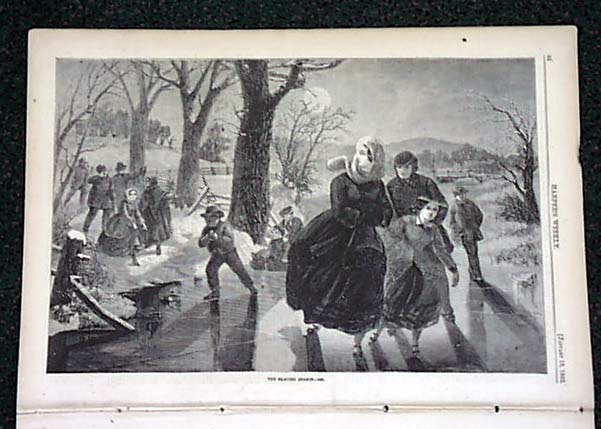 
HARPER'S WEEKLY, New York, January 18, 1862  The front page has two prints: "Port Royal Ferry, Scene of the Battle of First January, 1862" and a cartoonish print showing a: "Scene in the Parlor of Mrs. Barnwell's House at Beaufort, South Carolina" showing various African-Americans (see).
Inside has a full page of: "The Vessels of General Burnside's Expedition at Annapolis"; a full page by print by the famed artist Winslow Homer titled: "The Skating Season--1862". There are several half page prints including: "Surprise of Rebels Between Hurricane & Logan, Western Virginia, by a Detachment of Colonel Piatt's Zouaves...", "The Union Prisoners at Richmond, Virginia", "Grand Review of General Burnside's Expeditionary Force at Annapolis", "Building Huts For the Army on the Potomac", "The War In Virginia--A Reconnaissance in a Laurel Brake", "Applying for Passes at the Office of the Provost Marshal at St. Louis" and "The Army on the Potomac--Bringing in Rebel Prisoners".
The doublepage centerfold is a nice overview of: "The City of Richmond, Virginia" above which is a: "Map of the James River, Etc. From Richmond to the Ocean". There are also small prints of "General Burnside, Commanding the Burnside Expedition" and "Commodore Goldsborough, Commanding the Naval Part of Burnside's Expedition". The back page has 2 political cartoons.
Complete in 16 pages.