Home > Back to Search Results > Fort Pickens and Charleston...
Click image to enlarge 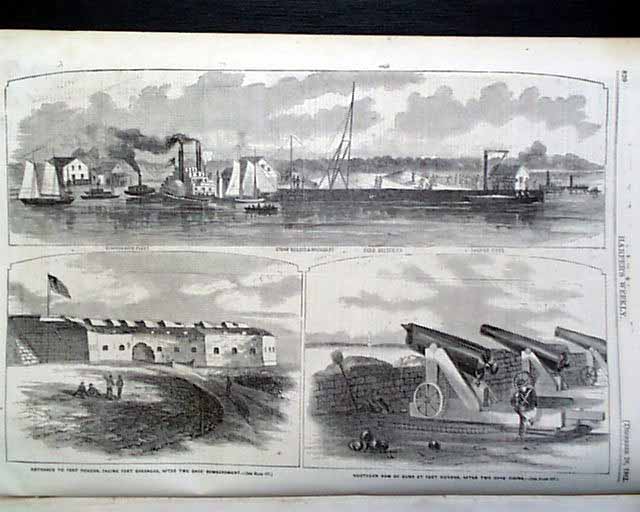 
HARPER'S WEEKLY, New York, December 28, 1861  The full front page is taken up with: "Union Refugees From Western Missouri Coming Into St. Louis". Other prints inside include: "Entrance to Fort Pickens, Facing Fort Barancas, After Two Days' Bombardment" "Northern Row of Guns at Fort Pickens..." "Bird's-Eye View of Fort Pickens During the Bombardment" "General Halleck's Fleet of Mortar-Boats for Service on the Mississippi"; "The City of Charleston, South Carolina, Looking Seaward & showing the Burned District"; plus six smaller prints of buildings showing: "The Burning of Charleston".
The double page centerfold is of the "Great Fair Given at the City Assembly Rooms, New York, In Aid of the City Poor". Other prints include: "The Execution of the Deserter William Johnson in General Franklin's Division, Army of the Potomac" and "Fort Pulaski, Savannah River, Georgia".
The back page has two political cartoons. Complete in 16 pages.