Home > Back to Search Results > The Civil War in Florida...
Click image to enlarge 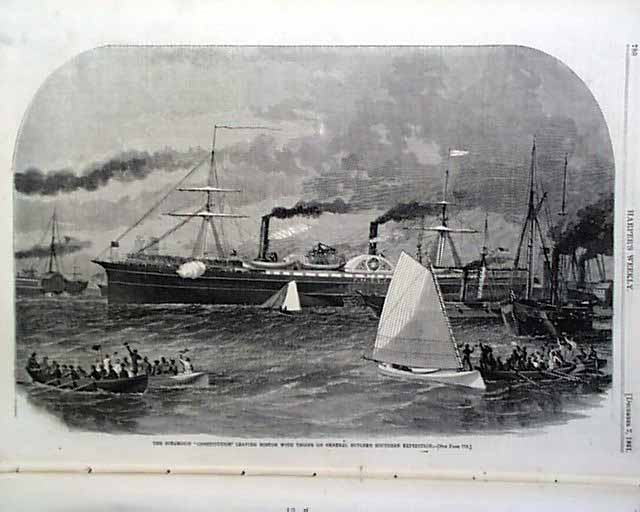 The Civil War in Florida...


HARPER'S WEEKLY, New York, December 7, 1861  The full front page has 2 prints of a: "View of Fort Warren Boston Harbor". Other prints inside include: "The Battle of Belmont--Charge of Colonel Dougherty, 22nd Illinois Regiment, Upon the Rebel Batteries" "The Battle at the Southwest Pass--The ram 'Manassas' Attacking the 'Richmond' " "...Retreat of the Rebel Flotilla" "The Post Office at Hilton Head, South Carolina" "Landing Stores at Hilton Head, South Carolina" "Our Picket at General Drayton's Mansion, Hilton Head" "Views of the Southwest Pass on the Mississippi River" includes 2 prints; "Camp Nevin, Kentucky, General McCook's Headquarters" has 3 prints.
The doublepage centerfold has 2 prints: "The Great Review at Bailey's Cross Roads, Virginia..." and "View of the Harbor of Pensacola--Santa Rosa Island & Port Pickens in the Foreground, Rebel Batteries & Navy Yard in the Distance". Additional prints include; "The Steamship 'Constitution' Leaving Boston with Troops of General Butler's Southern Expedition" "The Battle of Santa Rosa" "The Battle of Santa Rosa--The Rebels Driven by the Regulars to Their Boats".
The back page has a political cartoon. Complete in 16 pages.