Home > Back to Search Results > Winslow Homer on the songs of war...
Click image to enlarge 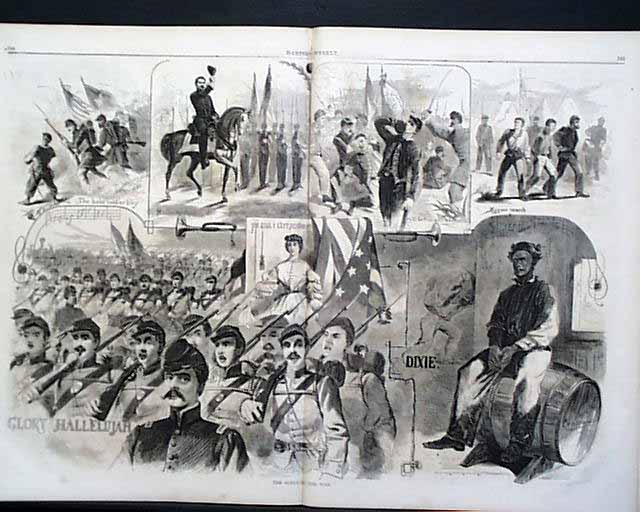 Winslow Homer on the songs of war...


HARPER'S WEEKLY, New York, November 23, 1861  The most notable print would be the very nice doublepage centerfold done by famed artist Winslow Homer, titled" "The Songs of War", and features six prints.
The full front page has two prints captioned: "The War In Missouri--General Jim Lane's Camp Near Humansville, Missouri". Other prints inside include: "Capture of a Rebel Picket Near Shreve's Farm, Virginia" "Departure of Troops from Camp Union at Bladensburg, Maryland, to Join Sickle's Brigade at Fort Tobacco" "Map of South Carolina Showing the Proportion of Slaves in Each County" "Colonel Dougherty of the 22nd Regiment Illinois Volunteers" "General Hunter, Commanding Our Army in Missouri" "The Batteries on the Potomac--Evansport" "...Budd's Ferry" "Munson's Hill as it Now Appears..." "Photographic Saloon in Camp near Ball's Cross Roads, Virginia" "Headquarters at Camp Dick, Robinson, Near Brayantsville, Kentucky" "Burning of the Government Hospital in E Street, Washington--Rescue of the Sick & Wounded" "The 31st Regiment Ohio Volunteers (Colonel Walker) Crossing the Kentucky River at Boone's Knob" "View Of the Mountain Region (The Seat of War) In Western Virginia from the Summit of Limestone Mountain" and a print of: "Thurlow Weed, Esq."
The back page has 2 political cartoons. Complete in 16 pages.