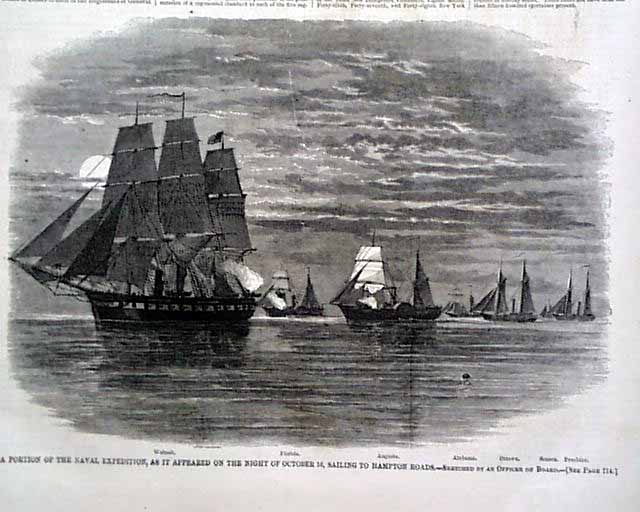 
HARPER'S WEEKLY, New York, Nov. 9, 1861 (See Note Below - excludes multi-panel map)   The front page has a print of an: "Attack Upon the Camp of the Sixth Regiment New York Volunteers (Wilson's Zouaves), On Santa Rosa Island" as well as a print of: "Captain S. F. Dupont, Commanding the Great Naval Expedition".
Other prints inside include: "Our Army at Edwards' Ferry on the Potomac, Opposite Leesburg" "The Valley of the Shenandoah, Virginia" "Presentation of Colors to General Viele's Brigade Previous to Their Departure on the Great Naval Expedition" "A Portion of the Naval Expedition as it Appeared on the Night of October 16 Sailing to Hampton Roads" "The Great Naval Expedition Preparing for Departure from Annapolis, Maryland" "Camp in the Woods Near Leesburg, Loudon County, Virginia--Virginia Infantry" "Our Fleet at the Mouth of the Mississippi Attacked by Hollins's Fleet of Fireships on October 12" "Arkansas Troops Now Under Beauregard, In Virginia" and prints of: "Colonel Devens, 15th Massachusetts Volunteers" and "Brigadier-General Lovell H. Rousseau, of Kentucky".
The back page has 3 political cartoons. Complete in 16 pages.