Home > Back to Search Results > The resurrected 'Merrimac' ready for it historic battle...
Click image to enlarge 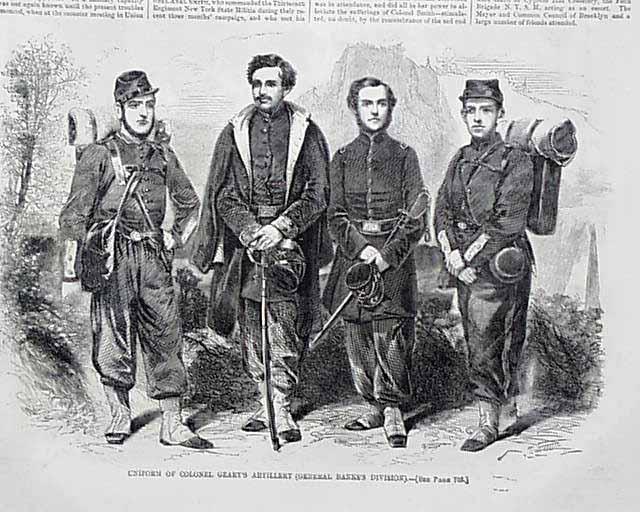 The resurrected 'Merrimac' ready for it historic battle...


HARPER'S WEEKLY, New York, November 2, 1861  The front page is taken up with: "The Rebel Steamer' Merrimac' Razed, and Ironclad" which would figure in the historic battle with the Monitor less than 5 months later. Also on the front page: "Henrico County Jail, Richmond, Virginia".
Other prints inside include: "The Rebel Batteries on Sewall's Point and Crany Island" which has two scenes; "The Late General E.D. Baker, Killed in Battle Oct. 21, 1861" "The Late Colonel Smith, Of the 13th Regiment N.Y.S.M." "Uniform of Colonel Geary's Artillery (General Banks's Division)" "The Army of the Potomac--Scene in Camp After Evening Parade" "The Army of the Potomac--The Picket Guard" "Provisions for the Army" includes 5 prints; "Camp of General Hunter's and General Asboth's Divisions (General Fremont's Army) at Tipton, Missouri" "War Scenes at and About Washington" has 6 scenes; "The 'Seminole' and the 'Pocahontas' Engaging the Rebel Batteries at Evansport" "Submarine Infernal Machine Intended to Destroy the 'Minnesota' " has a nice cross-section of a submarine in action.
The doublepage centerfold is titled: "The Great Naval Expedition" and shows many ships, plus has separate prints showing: "Shipping Horses" and "Horses in Stalls Between Decks".
The back page has two political cartoons: "A 'Smash' For Jeff" showing Jeff Davis, and: "Mr. Bull in his Big Ship 'Neutrality...". Complete in 16 pages.
This issue is complete in 16 pages and is in good condition.