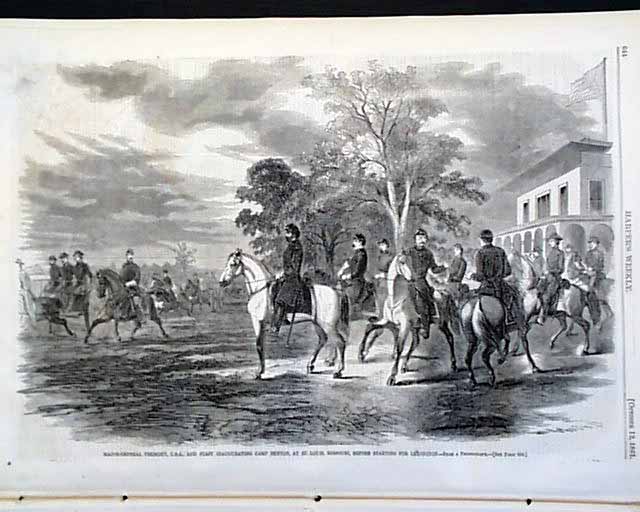 
HARPER'S WEEKLY, New York, October 12, 1861  The full front page is taken up with 3 prints: "Burning of the Privateer 'Judith' at Pensacola", "Brigadier-General Sturgis" and "The Rebel General Price".
Other prints inside include: "Major-General Fremont and Staff Inaugurating Camp Benton, at St. Louis, Before Starting for Lexington" "Charge of the Irish Regiment (Colonel Mulligan) Over the Breast-Works at Lexington, Missouri" "Burning the Pensacola Dry Dock, Off Fort Pickens, Florida" "Building Pontoons for Military Use on the Mississippi" "The  City of Maysville, Kentucky, Scene of the Great Union Barbecue" "The Gunboat New Era, Just Built at St. Louis, Missouri" "Camp pof General Rosseau's Brigade, Near Muldraugh's Hill, Kentucky".
The doublepage centerfold is a great print titled: "Our Generals" showing all of them on horseback, and labeled beneath the print. Also prints labeled: "Section of the Earthworks Commanding the Approaches to Leesburg, Virginia, on the South" "Terrible Railway Accident on the Ohio and Mississippi Railroad" "Grand Cavalry & Artillery Review at Washington on September 14, 1861" and: "The Battle of Lexington, Missouri".
The back page has 2 political cartoons: "How To Deal With Female Traitors" and "Stop Thief!". Complete in 16 pages.