Home > Back to Search Results > Sharpshooters in the Civil War...
Click image to enlarge 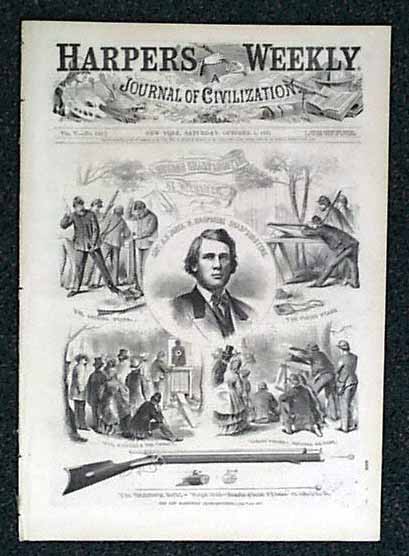 Sharpshooters in the Civil War...


HARPER'S WEEKLY, New York, Oct. 5, 1861  The full front page is taken up with: "The New Hampshire Sharp-Shooters - The Telescopic Rifle" which has 6 prints of the "Berdan Sharpshooters at Weehawen" led by Capt. A. B. Jones.
Other prints inside include: "The Men-of-War in Our Harbor" "Munson's Hill, the Advanced Post of the Rebel Army on the Potomac" "Bailey's Cross Roads Advanced Post of the United States Army  Opposite Munson's Hill" "United States Mississippi Gunboats being Built at Carondelet, Near St. Louis, Missouri" "The Rebel Steamer 'Page', Now Lying at Acquia Creek" "Earthworks Now Being Constructed on Federal Hill, Baltimore, by Duryea's Zouaves" "Departure of the First Ohio Zouave Regiment from Cincinnati for Western Virginia" "Recruiting for the Confederate Army at Woodstock, Virginia" "The Bivouac Fire at the Outposts of Our Army on the Potomac" "Rebel Prisoners in the Dungeon of the State House at Jefferson City, Missouri" "A Rebel Prowler Shooting a Union Picket near Jefferson City, Missouri".
Also a: "Map of North Carolina, Showing Fort Hatteras & the Sounds It Commands", "The Rebel General Joseph E. Johnston" "The Ascent of Gauley Mountain in Western Virginia, by the 12th Ohio Regiment" "Major-General McClellan's Bodyguard (Sturges Rifles)" "Presentation of a Flag to Kentucky Volunteers at Camp Bruce, near Cynthiana, Kentucky" and a small print of: "Fairfax Court House, the Rebel General Bonham's Headquarters"
The back page has 2 political cartoons: "Our New Major-
General" and "Infamous Persecution". Complete in 16 pages.