Home > Back to Search Results > A dramatic naval battle...
Click image to enlarge 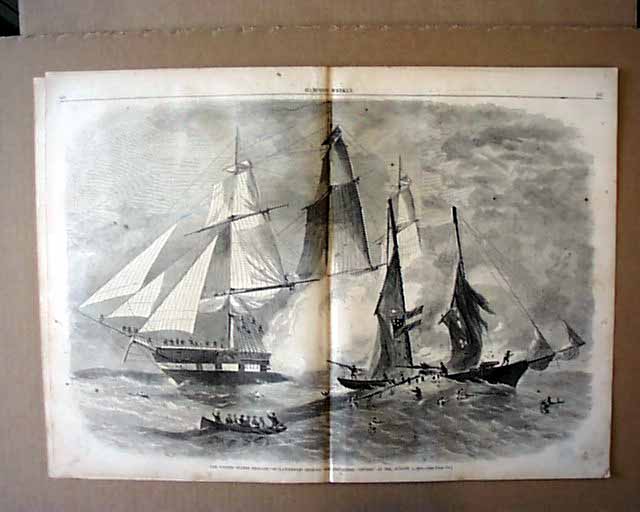 
HARPER'S WEEKLY, New York, Aug. 24, 1861  Half of front page shows: "Presentation of Prince Napoleon by Secretary Seward to the President", which shows Abraham Lincoln. Other prints within include a full page: "General McClellan & His Staff" & fullpg: "Splendid Charge of U.S. Cavalry at the Battle of Dug Spring, Missouri" & "Scenes in the Brooklyn Navy Yard" including a print of a gun boat under construction.
Perhaps the most dramatic print in this issue is the doublepage centerfold of: "The U.S. Frigate 'St. Lawrence' Sinking the Privateer 'Petrel' At Sea...". Other prints include: "Camp Warren, Burlington, Iowa, the Rendezvous for the Iowa Troops" "Interior of Upper Batter at the Chain Bridge, Washington, D.C." & Interior of Lower Batter at the Chain Bridge" plus "Col. Beridan of the Beridan Sharpshooters, Practicing at a Target at Weehawken, New Jersey" "The U.S. War Steamer 'Minnesota', flagship of the Blockading Squadron" plus there are nice prints of "Brigadier-General Burnside" and "The Rebel General Lee" with biographies of both.
The back page has two political cartoons. Complete in 16 pages.