Home > Back to Search Results > Scenes of the Battle of Bull Run...
Click image to enlarge 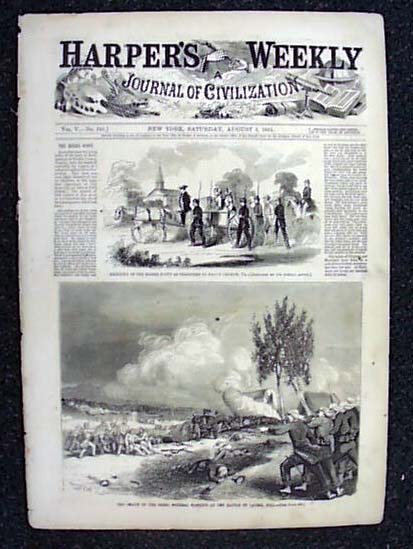 Scenes of the Battle of Bull Run...


HARPER'S WEEKLY, New York, Aug. 3, 1861  The front page features two prints on the Civil War, captioned: "The Death of the Rebel General Garnett, at the Battle of Laurel Hill" and "Bringing in the Misses Scott as Prisoners to Fall's Church, Va." with a related article.
Inside includes a print of "Major-General McClellan", a nearly half pg: "Presentation of a Flag to the Webster Regiment, Boston...", a nearly half pg: "The Attack on the Second Mate" which includes an African-American; small prints of: "The Schooner S. J. Waring..." and the: "Cabin of the S. J. Waring".
A full page print shows: "The Battle of Carthage, Missouri" and the very dramatic (and displayable) doublepage centerfold is titled: "Colonel Hunter's Attack at the Battle of Bull's Run". Other smaller prints include: "Graves of the Ohio Volunteers Near Roach's Mills, Virginia" "Camp of the First Brigade of the Confederate Army on the Fair Grounds Near Winchester, Virginia" "Skirmish Between a Portion of the Ninth & Confederate Troops Across the River at Sandy Hook" "Locomotives Dismantled by the "Rebels at Martinsburg, Virginia" "Two Members of the New York Ninth...Hauling Down the Secession Flag at Harper's Ferry" "Bowlesburg, the Head Quarters of General Hill in Western Virginia" 'Fall's Church, Virginia, the Advanced Post of Our Army on the Potomac" "Commencement of the Battle at Bull's Run" and a half page: "Firing Into a Deserted Earthwork Near Bull's Run", and a print of: "Locomotives Dismantled by the Rebels at Martinsburg, Virginia".
There is another nice full page print showing: "Second Mississippi Regiment (Wildcats) Passing Along Main Street, Winchester, on their Way to Bunker Hill, Virginia".
This issue also includes a serialized portion (the final installment) of "Great Expectations", by Charles Dickens, as well as two political cartoons on the back page. Complete in 16 pages.