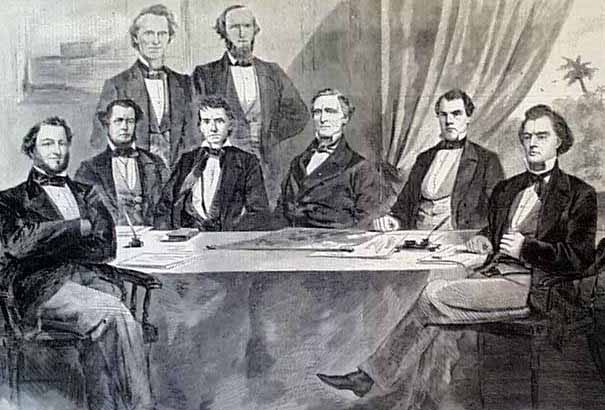 
HARPER'S WEEKLY, New York, June 1, 1861 The front page is entirely taken up with a print of: "Major-General Benjamin F. Butler, U.S.A." along with a biography of him. Inside has a full page print of: "The Cabinet of the Confederate States at Montgomery" including Jefferson Davis & Alexander Stephens. Smaller prints show: "Luther C. Ladd, A Mass. Vol. Killed at Baltimore" and "William G. Brownslow, of Tennessee"
Other prints include: "A Juvenile Party", half page prints of: "Fort Pulaski, Savannah River, Georgia" "and "Mr. Russell, Correspondent of the London 'Times'...inspecting the 10 inch Columbiad at Fort Pulaski"; a halfpg: "Quarters of the 69th (Irish) Regiment New York State Militia at Georgetown College, D.C." & "The Bouquet Battery Commanding the Bridge at the Relay House..." & "Sand-Bag Battery, Commanding the Road to Harper's Ferry Near the Relay House..." and "Sleeping Bunks of the First Rhode Is. Reg. at the Patent Office, Washington"  & "U.S. Vols. Attacked by the Mob, Corner of 5th & Walnut Streets, St. Louis, Missouri" & "Drumming Out Albany Volunteers who Refused to Take the Oath". Also a smaller print of: "The Armory at Albany, New York", "Corner Scene During the Excitement at St. Louis, Missouri" & map of: "Cairo City", Illinois.
The doublepage centerfold has a great view of: "The Military Occupation of Baltimore--Butler's Encampment on Federal Hill" with scenes of the: "City of Montgomery, Alabama" "The White House at Montgomery" and "Drumming Up Recruits for the Confederate Army".
The back page has 4 cartoon, two of which are concerning the Civil War. This issue also includes a serialized portion of "Great Expectations", by Charles Dickens. Complete in 16 pages.