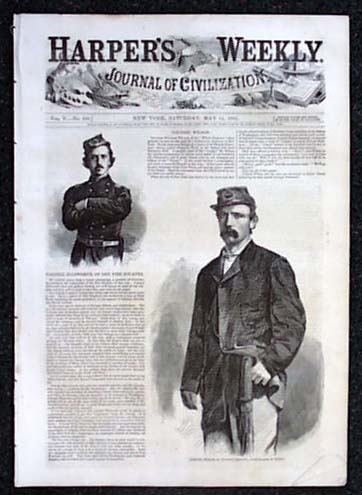 
HARPER'S WEEKLY, New York, May 11, 1861  The front page has prints of: "Colonel Ellsworth of the Fire Zouaves" and "Colonel Wilson of Wilson's Brigade" with related text.
Inside has many war-related prints including: "View of Fort McHenry, Baltimore" "The Burning of the Bridge at Canton, Maryland, by the Mob" "The Rendezvous of the Virginians at Halltown, Virginia...to March on Harper's Ferry", "The Burning of the United States Arsenal at Harper's Ferry" "The March of the Virginians on Harper's Ferry" "General View of Annapolis, with the 'Constitution' In the Foreground" "The Practice Battery at Annapolis" "Target Practice from the Naval Battery" "The Naval Monument in the Grounds of the Naval School at Annapolis" "Middies Learning the Ropes at the Naval School on Board the 'Constitution', Annapolis".
The doublepage centerfold has two scenes: "Destruction of the United States Navy Yard at Norfolk, Virginia, by Fire..." and "Destruction of the United States Ships at the Norfolk Navy Yard...".  And still there are more war-related prints including: "The Thirteenth Regiment New York State Militia Leaving Their Armory in Brooklyn for the War", "The Sixty-Ninth (Irish) Regiment Embarking in the 'James Adger' For the War" "Camp on the Battery, New York City" "The Temporary Barracks Erected in the Park, New York City, for the Accommodation of Troops" . Also a nice full page: "Fortifications Thrown up to Protect the United States Arsenal at St. Louis, Missouri" which includes 4 vignettes, and a three-quarter page print: "Camp Curtin, Near Harrisburg, Pennsylvania...". The back page shows; "Seventh Regiment on Board the 'Boston', en Route for Annapolis" and "The Men of the Eighth Massachusetts Regiment Repairing the Bridges on the Railroad form Annapolis to Washington".
This issue also includes a serialized portion of "Great Expectations", by Charles Dickens. Complete in 16 pages.