Home > Back to Search Results > View of Charleston during the bombardment of Ft. Sumter...
Click image to enlarge 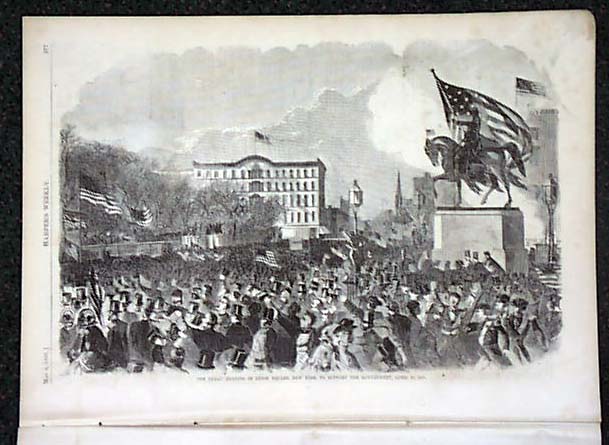 View of Charleston during the bombardment of Ft. Sumter...


HARPER'S WEEKLY, New York, May 4, 1861  The full front page is taken up with a famous print: "The House-Tops in Charleston During the Bombardment of Sumter" showing men & women viewing the battle in the harbor.
Inside has a full page: "Map of Part of Maryland and Virginia Showing the Probable Theatre of the War", and "The Great Meeting In Union Square, New York, to Support the Government". Also a fullpg: "The Boston Regiments Embarking for Washington the Jersey City Cars" and another: "The Seventh Regiment Marching Down Broadway to Embark For the War". A nearly halfpg: "Departure of Transport Steamers from New York for Washington with Volunteers" and a halfpg: "The 'R.R. Cuyler' Sailing from New York with the 71st Regiment New York State Militia on Board". A full page shows: "First Blood--The Sixth Massachusetts Regiment Fighting their Way Through Baltimore".
Other prints include: "Stevens's Bomb-Proof Floating Batter", "The Heroes of Fort Sumter" "Parade of United States Troops on Governor's Island Before Embarkation" and "Recruits Drilling in Squads on Governor's Island, New York" and a small print of: "Harper's Ferry, Virginia".
This issue also includes a serialized portion of "Great Expectations", by Charles Dickens. The back page has two cartoons. Complete in 16 pages.