Home > Back to Search Results > Military scenes in Florida: preparing for the Civil War...
Click image to enlarge 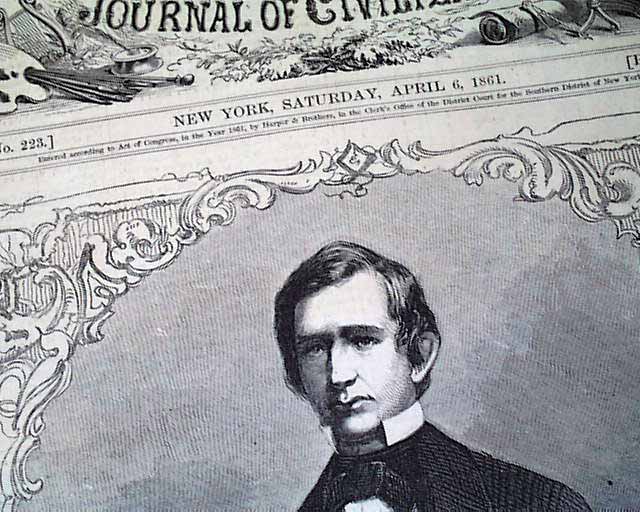 Military scenes in Florida: preparing for the Civil War...


HARPER'S WEEKLY, New York, April 6, 1861  The full front page is a print of: "Hon. William H. Seward, Secretary Of State" taken from a Brady photograph. Inside includes a two-thirds page vertical print of: "The United States Gun-boat 'Wyandotte' Firing a Salute on Washington's Birthday in Pensacola Harbor", plus a nearly half page of: "The Flag-Staff Bastion at Fort Pickens, Florida".
The doublepage centerfold has eight "Virginia Sketches" which include: "Making Gun Carriages--Fort Norfolk--Richmond Armory--The Constitution--Craney Island--the Rip-Raps--Frigate Merrimac" and a naval scene. A full page is taken up with a very ornate presentation of the: "Coats of Arms of the Several States of the Union". Included also is a print of: "Mrs. Yelverton and 3 back page cartoons.
Within the text is a serialized portion of "Great Expectations" by Charles Dickens. Complete in 16 pages.