Home > Back to Search Results > The Civil War in Texas... The Alamo...
Click image to enlarge 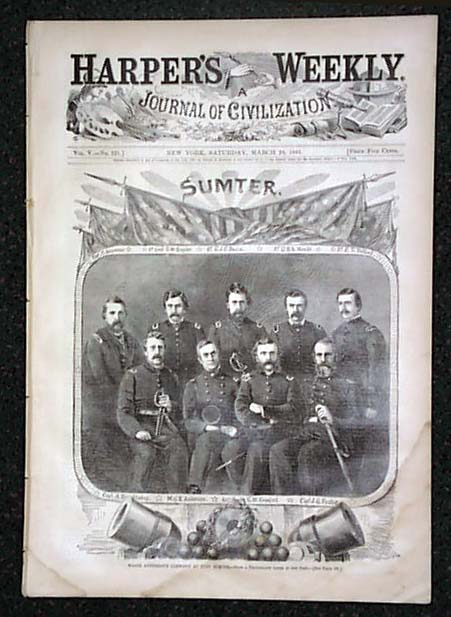 
HARPER'S WEEKLY, New York, March 23, 1861  The front page is taken up with: "Major Anderson's Command at Fort Sumter" which includes 9 officers, one of whom is "Capt. A. Doubleday". Other prints inside include: "Fort Sumter, Charleston Harbor, South Carolina" "Surrender of Ex-General Twiggs, Late of the United States Army, to the Texan Troops in the Gran Plaza, San Antonio, Texas" Fort Brown, Texas" "Fort Lancaster, Texas" "The Alamo, San Antonio, Texas, Late Headquarters of Ex-General Twiggs" "Washington the Mediator" and a print of: "Hon. Salmon P. Chase, of Ohio, Secretary of the Treasury".
This issue also contains a serialized portion of "Great Expectations" by Charles Dickens. The back page is mostly taken up with 4 cartoons. Complete in 16 pages.