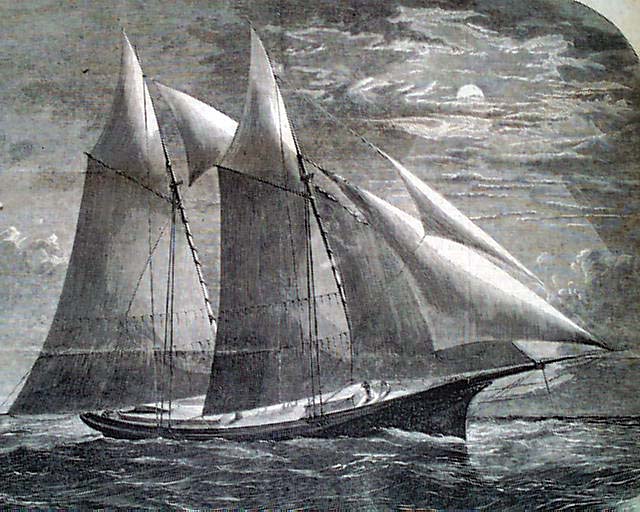 
HARPER'S WEEKLY, New York, January 15, 1859  The front page features a rather large illustration of: "The Yacht 'Wanderer'" along with a related article on it. Its infamy is in that it was the last documented ship to bring a cargo of slaves from Africa to the United States, which it did on November 28, 1858. Part of the article notes: "...after detaining the Wanderer for a week or so, let her go. The next heard of her was early in December last when she suddenly loomed up on the coast of Georgia and was charged with having been engaged in the slave trade...The general opinion...is that the Wanderer did not herself carry slaves from Africa, but that she served as the pilot and decoy of a larger vessel which did; and that between three and four hundred slaves were landed on or near Jekyll Island & from thence scattered throughout the Southern country...". History would prove that the Wanderer did carry slaves, in fact it delivered the last load of slaves to land in America.
Other illustrations within include a full page illustration of: 'The United States Sloop of War Brooklyn'. Two half page illustrations entitled 'Railway Train in a Snow Storm' and 'Stopped by the Snow-Drift'. An article "Incidents of Travel on the Tehuantepec Route" features several small illustrations. Two illustrations of the  'Inauguration of Governor Morgan' encompass nearly a full page.
Sixteen pages, in good condition, and contains additional prints and related text. See photos for details.