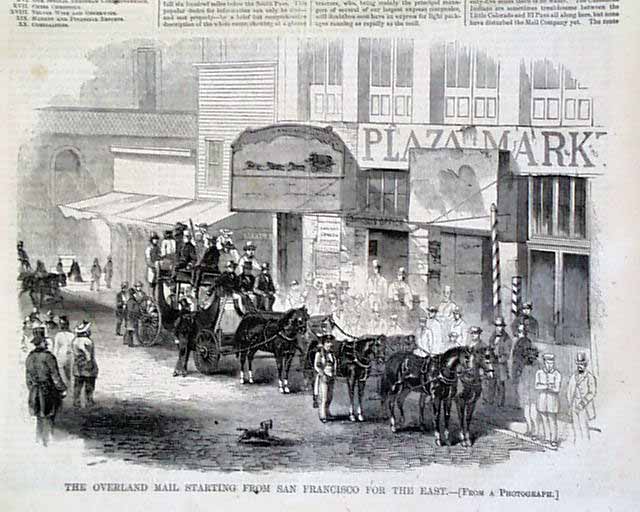 
HARPER'S WEEKLY, New York, December 11, 1858  The front page features a very nice illustration 'The Overland Mail Starting from San Francisco for the East' shows the Butterfield Overland, plus text. Inside is a text article "Gold Digging" with the latest accounts from Frazer's River. An article on "Views in Japan" features two half page illustrations 'General View of Jeddo, Capital of Japan' and "View of the Palace of the Emperor of Japan" and two smaller illustrations "A Japanese Nobleman Going a Hunting" and "Japanese Ladies". Halfpage 'Officers of the Sabine Visiting the Fortifications at Bermuda'  and 1/3 page: 'Opium-Smoking Saloon'.  "The Shipwreck of the 'Jeanie Johnson'" also features a large illustration of "The Captain, Captain's Wife, and Crew of the 'Jeanie Johnson' Housed in the Maintop during the Gale".
Complete in 16 pages, in good condition as shown and contains additional prints and related text.