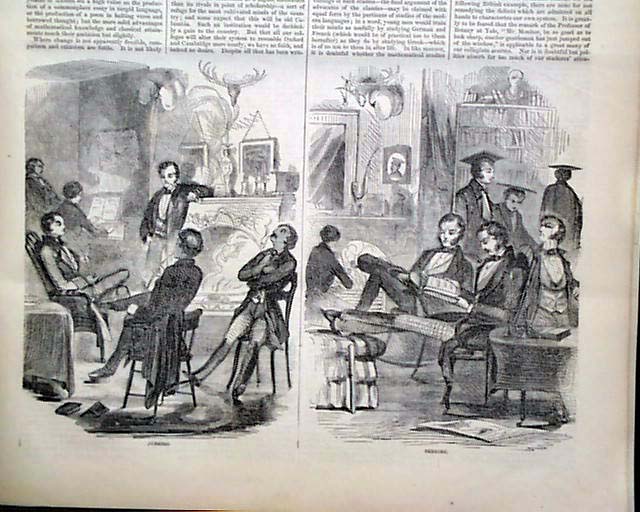 
HARPER'S WEEKLY, New York, August 1, 1857  The front page has illustrations of" "Tomb of Joseph (at Shechem)" and "Approach to Samaria" with an article: 'Travel Notes in Bible Lands'. The double page centerfold is taken up with five prints by famed artist Winslow Homer: "The Match Between Sophs and Freshman -The Opening" "Freshmen" "Sophs" "Juniors" "Seniors" which are from very early in his career.
Other illustrations include: "Reaping at Syracuse" features illustrations include: "Reaping in the Olden Times" "The Toll-Gates on the Road to the Field" "Reaping in our Time" "Dream of the Fellow of Cambridge" and "Hon. Jos. A. Wright, of Indiana, United States Minister to Berlin", "The Outbreak in India -The City of Delhi" "An Indian Ex-King" "A Hindoo Hack-Cart" "Native Dance of the Hindoo Girls" "A Criminal Trial in India" "Sepoys" "A Hindoo Priest" "A Sepoy Encampment" "The Dress Circle at a Concert-Front Row.
Complete in 16 pages, in good condition.