Home > Back to Search Results > Publisher with an interesting life...
Click image to enlarge 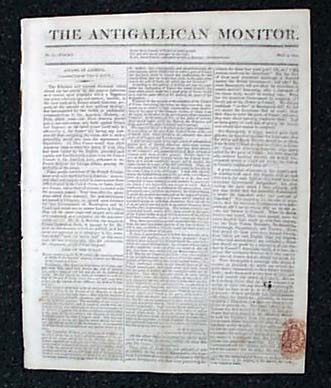 Publisher with an interesting life...

Item # 153038  THE ANTIGALLICAN MONITOR, London, 1811  Published by Lewis Goldsmith, an Anglo-French publicist of Portuguese-Jewish extraction. Previous to publishing this newspaper he spend much time in France acting as a "secret agent" to Napoleon, including efforts to kidnap King Louis XVIII. Goldsmith returned to England in 1809 & was at first he arrested and imprisoned, but soon was released. By 1811 he had become strongly anti-republican, founding this newspaper (subsequently known as the British Monitor) through which he now denounced the French Revolution (credit Wikipedia).
Eight pages, 9 1/4 by 11 1/2 inches, minor foxing, nice condition.