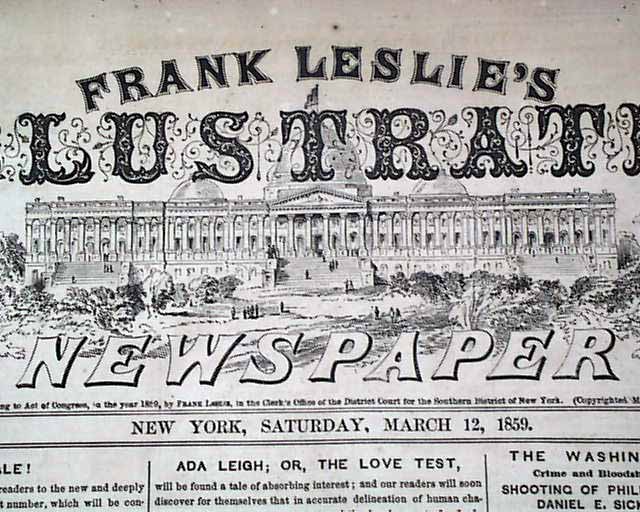 "In his pre- and post-Civil War careers, as well as during the conflict, Daniel E. Sickles proved to be one of the most controversial of Union corps commanders. Prewar, the New York City native had already become the first man acquitted of a murder charge on the grounds of temporary insanity. Sickles, a congressman, shot down Philip Barton Key-the son of the composer of the "Star Spangled Banner"-in LaFayette Park,across the street from both Sickles' home and the White House. Key had been having an affair with Sickles' wife, whom Sickles had married while serving as secretary of the U.S. legation in London. Defense attorney Edwin M. Stanton gained the innovative verdict. Sickles then publicly forgave his wife, outraging the public, which had applauded his role in the shooting, and apparently ending his political career. just then the Civil War broke out and he saw his chance to get a new start.

When authorized to raise a regiment he proceeded to recruit enough men for a brigade and was soon rewarded with a brigadier's star. Frequently absent from his command seeking advancement in Washington, he nonetheless commanded his brigade at Seven Pines and during the Seven Days.

In charge of the division, he fought at Fredericksburg and received the regular army brevet of brigadier general in 1867. His prewar reputation as a womanizer and heavy drinker returned to him during his career as a brigade and division commander, and his brigade was considered a rowdy bunch. But his heyday came when Joseph Hooker took command of the army.

Many officers complained that Hooker, Sickles, and Daniel Butterfield had converted the army headquarters into a combination of bar and brothel. Sickles' own headquarters were considered to be even worse. After fighting at Chancellorsville, Sickles retained charge of the 3rd Corps even after Hooker's removal. Then on the second day of Gettysburg he did not like the sector assigned to his men along Cemetery Ridge. It was too long and low to his liking and he unilaterally decided to advance to the Peach Orchard. If he had survived the battle unscathed he probably would have been court-martialed. But some claim that his advanced position absorbed the shock of Longstreet's assault before it could reach the ridge. This theory claims that if the assault had hit the ridge in full strength it would have broken the Union line. This is, however, highly debatable since his movement put the left flank of the 2nd Corps in the air as well as both of his own.

Always courageous on the field of battle, he was struck in the leg by a shell as his command was beginning its withdrawal. The leg was amputated within half an hour. In 1867 he was brevetted regular army major general for his role in the battle and three decades later was awarded the Congressional Medal of Honor. He donated his leg to an army medical museum and in later years is said to have visited it.

During his recovery he engaged in a feud with Meade over his generalship and who had won the battle. As a result he was denied further field command and was assigned a series of special missions by the War Department. Made colonel, 42nd Infantry, in the 1866 regular army reorganization, he was mustered out of the volunteer service as a major general (since late 1862) on January 1, 1868.

The next year, he was retired with the advanced rank of major general in the regular establishment. Appointed U.S. minister to Spain by Grant, he furthered his reputation as a ladies' man. In the 1890s he served a term in Congress. For 26 years-until forced out in a financial scandal-he chaired the New York State Monuments Commission." Source: "Who Was Who In The Civil War" by Stewart Sifakis