Home > Back to Search Results > From the Washington Territory...
Click image to enlarge 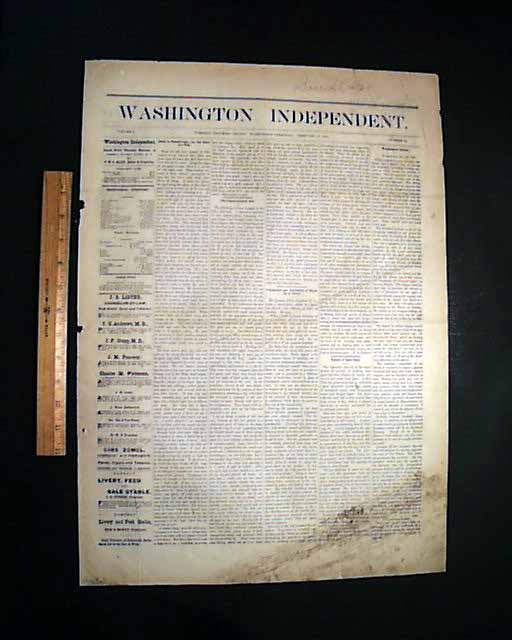 From the Washington Territory...


WASHINGTON INDEPENDENT, Pomeroy, Columbia County, Washington Territory, 1881  A volume one issue from this small town in Southeastern Washington, published 8 years before statehood.
It has a population of about 1500 today, and has an interesting history as noted in Wikipedia: "The Nez Perce  trail existed in the area before history was recorded, and the first written record of Caucasians passing through the area were Lewis and Clark in 1805. Captain Benjamin Bonneville also passed through the future site of the town while he was surveying for the U.S. government in 1834. In 1860, an Irish settler named Parson Quinn settled just east of present-day Pomeroy, and lived there for the next 40 years. Rancher Joseph M. Pomeroy purchased the land in 1864, and platted the town's site in May 1878."
Four pages, never-trimmed margins, a nice variety of news of the day, local tidbits, and advertisements, some of which are illustrated.
The photo is representative of the issue, you will receive a randomly dated issue from within the year.

A Tombstone newspaper with an ad for ...