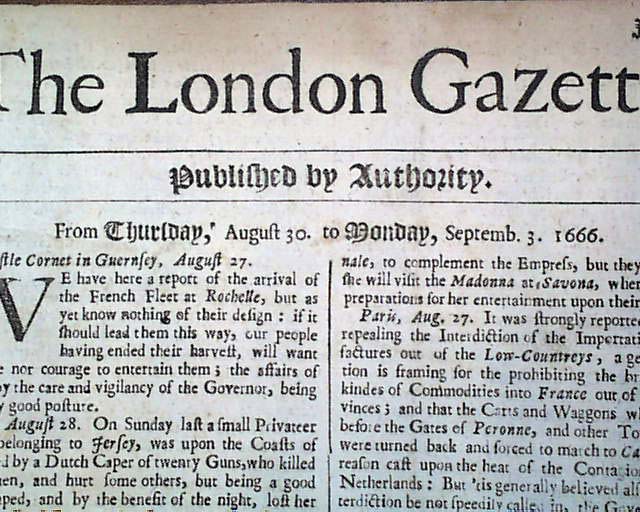 The Great London Fire report in a London newspaper...


THE LONDON GAZETTE, September 3, 1666 One of the premiere issues of all 17th century newspapers, reporting one of the equally tragic events of the period. This issue was published during the outbreak of what would be known as the Great London Fire, which destroyed much of the city of London. Since it was an early report, the article is found at the bottom of the back page of this singlesheet issue, beginning with the dateline: "London, Sept. 2 About two oclock this morning a sudden and lamentable fire brake out in this City which continues still with great violence, and hath already burnt down to the ground many houses thereabouts..."  with further details (see the photos). Significant to find this early report in a London newspaper, and almost certainly a very first report of this disaster. Also on the back page of this issue is a report concerning the Great Plague (see photo). The issue measures about 6 by 10 inches, is somewhat irregular at the blank spine margin not affecting any text, and has a crescent shaped portion on the front page which is more lightly inked than the rest of the issue. Otherwise this issue is in very nice condition. An exceeding scarce and desirable item.